Roger Ebert is an indomitable spirit, and Life Itself is a definitive, inspired love letter to and from this man who loved movies and championed film – especially lesser known, independent films. 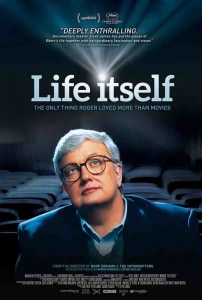 Directed by acclaimed filmmaker Steve James (Hoop Dreams and The Interrupters), Life Itself is a considerable, distinguished documentary about a Renaissance man, and soldier of the cinema who became one of the most influential cultural voices in America.

Roger Ebert made it possible for a wider, mainstream audience to appreciate film as an art form. His was a vivid voice who could explain and express movies with eloquent simplicity, and his identity as a film critic held filmmakers and films to a standard of responsibility to do it honestly and humanly.

Based on Roger Ebert’s best-selling 2011 memoir of the same name, and Executive Produced by Martin Scorsese (Good Fellas) and Steven Zaillian (Moneyball), Life Itself recounts the life of world-renowned film critic and is told in the order of his memoir and balanced with footage that started five months prior and up to the time of his passing. When James started the film, what quickly transpired wasn’t expected. Rather, his plan had been to document Ebert’s life in the present, and capture how he was routinely overcoming the obstacles of the illness, his work ethic, and sense of humor.

After a 2002 cancer diagnosis and a courageously open and public battle with cancer of the thyroid and salivary glands, Roger Ebert died in 2013 at the age of 70. He would eventually lose his ability to speak after the removal of his lower jaw in 2006, but through all those years the capacity and grace of his written word never left as his gift to the world. We are blessed to have his writing for as long as we did, and his reviews will remain forever.

Steve James’ documentary is never exploitative, although there is a sense of finality. The accessibility, personal footage and deep insight are at times emotional and harrowing, yet always fascinating and surprisingly encouraging.

Deeply affecting, movies take us inside the lives of other people, and Life Itself succeeds at just that.  With skill and tender finesse Steve James anatomizes Roger Ebert’s life for a full and thorough examination that is both heartfelt and funny, and at times surprising.

James weaves interviews with his colorful friends and colleagues who knew Roger before the notoriety and through his alcoholic years, to the filmmakers like Martin Scorsese, Werner Herzog (Aguirre, the Wrath of God), Errol Morris (Gates of Heaven), Ramin Bahrani (Chop Shop) and  Ava DuVernay (I Will Follow) who speak about the impact Ebert had on their careers. Those revealing moments intersect with the telling, often contentious relationship Roger had with Gene Siskell, and the incredible romance with the love of Ebert’s life, Chaz Ebert, whom he didn’t marry until he was 50 years old.

This deeply personal ode starts from the beginning of Ebert’s storied life as a young reporter and journalist, and continues through his 46 years of film criticism at the Chicago Sun-Times, to hosting his nearly quarter-century run with Gene Siskel with their signature “Two Thumbs Up” on their review show Siskel & Ebert and (after Sieskel’s death), Ebert & Roeper and Ebert Presents: At the Movies.

Ebert is the first film critic to win a Pulitzer Prize (1975) and the first to receive a star on the Hollywood Walk of Fame (2005).  He has written seventeen books, including a novel, and Roger wrote a successful screenplay for cult film director Russ Meyer who turned it into a film, Beyond the Valley of the Dolls.

But the impressive professional accolades and career success only scrape the surface of the lasting legacy Roger Ebert leaves behind. Roger Ebert loved the movies and to a generation of Americans, Roger Ebert was the movies.  He is beloved by millions – filmmakers, other film critics, and film lovers alike.  A fierce lover of life, Ebert possessed a discerning eye for film, the passionate soul of a poet, and the voice of the common man.

It is striking to realize, as the film points out, that Roger Ebert has been writing for practically half of the history of feature films. As one of the world’s best known film critics, Ebert captured the magic of the movies and the power of the seated escape into other worlds, times and place with his blunt, honest criticism – good or bad – of a film.

Roger once said, “The movies are like a machine that generates empathy.  It lets you understand hopes, aspirations, dreams, and fears. It helps us to identify with the people who are sharing that journey with us.”

In 1994, Roger Ebert and Gene Siskel championed James’ documentary film debut, Hoop Dreams, even before its first screening at the Sundance Film Festival. The film went on to earn an Academy Award, and now twenty years later, life has come full circle with the collaborative effort of Life Itself.

Whether you share a passion for cinema or call yourself a student of film you would be remiss not seeing this stunning frontrunner for the 2015 Best Documentary Oscar, a superb and poignant tribute to Roger Ebert – a life, who made a difference.

Life Itself – The official movie site.