Rodgers and Hammerstein’s timeless classic, The King and I, boasts one of the most luscious scores of all time. Shenandoah Summer Music Theatre opens this romantic musical about tolerance and cultural differences this Wednesday, July 9. In part 1 of a series of interviews with the cast members, meet the children of The King and I: Andrew Robare (Crown Prince Chulalongkorn), Charles Casey (Louis), and Natalie Youngblood (Princess Ying Yaowolak). 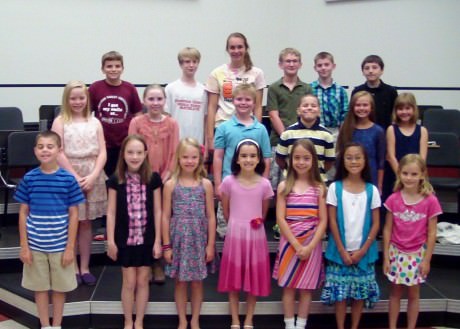 Andrew: My name is Andrew Robare. I’m going into 8th grade at Frederick County Middle School and I play Crown Prince Chulalongkorn in The King and I. I am also a slave, guard, and fighter in the House of Uncle Thomas ballet. I acted and sang previously at Shenandoah Summer Music Theatre (SSMT) in Oliver! and Peter Pan and as a soloist in All State Choir. I study dance at the Shenandoah Conservatory Arts Academy of Shenandoah University and Ashburn Academy of Dance, and I will be dancing in a Dance Intensive at Mercersburg Academy. Besides performing on stage, I like acrobatics.

Charles: My name is Charles Casey. I am a rising 6th grader at Johnson Williams Middle School in Berryville. I am playing the part of Louis in The King and I. I study  tap dance and music theater dance at Shenandoah Conservatory Arts Academy. I also have been playing the violin the last 8 years and performed with the Shenandoah Valley Youth Orchestra for 3 years. Previously, I was in Peter Pan at SSMT as well as Charlotte’s Web at the Old Opera House in Charles Town, WV. I study Tae Kwon Do and just received my 2nd degree Black Belt. I enjoy gardening , bike riding, origami and running.

Natalie: My name is Natalie Youngblood and I am a rising 7th grader at Frederick County Middle School. I am thrilled to have been cast in the role of Princess Ying Yaowolak in The King and I. I began acting when I was 6 years old through Wayside Theatre’s Young Peformer’s Workshops. In December 2011, I was excited to be cast as little lisping Rebecca Estep in the premiere of Glory Bea, A Shenandoah Christmas Story and to go on to reprise that role in 2012. I portrayed Gloria in Wayside’s production of Wait Until Dark, and performed as a Little Indian in Shenandoah Summer Music Theatre’s 2012 production of Peter Pan. I study voice and piano at Shenandoah Conservatory Arts Academy, am a member of Frederick County Middle School’s Select Chorus, and felt especially lucky to be selected as an alternate for Virginia’s All-State Middle School Chorus during my 6th grade year. When I am not acting I like swimming, volleyball, riding my bike, and spending time with my family.

What is the most exciting thing about performing with SSMT this summer?

Charles: Having the opportunity to have a featured part!! And being in a show with my brother, Harrison, and some of my friends from dance class. It has also been fun to have a scene with Andrew!

Natalie: I always love getting to know my fellow cast members, making new friends and spending time with old ones. There is always so much to learn from the adult actors and it’s so amazing to watch a show come together.

Andrew: I like Prince Chulalongkorn’s independence, but hate how he’s stuck-up.

Natalie: I am really excited about getting to change my appearance for the role of Princess Ying. I am a blonde, and have been asked to temporarily dye my hair black for this role. It gives me a chance to truly be “in character.” I also get to sing and I have a speech. The costumes are beautiful! What do I like the least? That I only get to BE Princess Ying from July 9-July 20.  It’s never long enough!

How have you gone about creating your character?

Andrew: I’ve been thinking most about being regal, and getting my Siamese accent.

Charles: One really neat thing I got to do was work with a dialect coach on speaking with an English accent.

Natalie: I started out researching my character by watching the movie, The King and I, to see exactly what my character did and said. From there I listened to what the director wants.

Andrew: I don’t dislike anything, but I love the glamour-for lack of a better term.

Charles: I enjoy performing and singing the best. What I like the least is the downtime in between my parts.

Natalie: I love the energy that comes from the audience. I like working together with the director and other actors to make a show to be proud of, and one that entertains the people who come to see it. Of course I love the opportunity to be in the moment as my character. There truly isn’t anything I don’t like.

What do you hope audiences will take away from your show?

Andrew: I think audiences will learn how change is a good thing.

Charles: I hope audiences will enjoy it and leave happy! People should come to SSMT because every show is great! SSMT is amazing and the quality of the shows is spectacular. This community is very fortunate to have SSMT in their backyard. The cost of a ticket is what you pay to park your car at The Kennedy Center and the shows are just as great! Being a part of SSMT has been a wonderful experience and I am so thrilled to have been given this chance. I am very grateful.

Natalie: The King and I is a great story about friendship and love in another culture. The audience will be singing the songs in their heads for weeks! Come out to Shenandoah Summer Music Theatre for a wonderful story, great music, beautiful costumes, cute children, and a perfect way to spend an evening out.

How to fight injustice? Felicia Curry on the crux of ‘My Lord, What a Night’