On a recent Friday night at Town Dance Boutique a large group of gentlemen gathered to watch a group of large gentlemen “bear” it all. Visiting from the City of Brotherly Love, Bearlesque puts the burly in burly q! Now if you’re not quite sure what a bear is check out this video by local singer/songwriter/superstar Tom Goss (NSFW if you’re a prude or are bothered by large, hirsute men in their swimtrunks blah, blah blah). Much like the burlesque community, bears embrace all body types as sexy with a decided “bigger (and hairier) is better” aesthetic.

Bearlesque opened with a group number to “Big Spender” combining two of my favorite things – (man) fur and Fosse. Following was Jack Haunt Knife, a DC-based ball of sass who was making his burlesque debut in a go for broke, shimmy and shake, show-the-floor-who’s-boss performance! 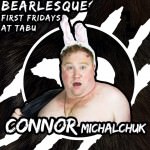 The Bearlesque trio, Buddy Rose, Connor Michalchuk and Scott LeStrange has each developed a unique persona embracing the different elements of burlesque.  Buddy is the cool I-know-you-want-me one, handsome in a ‘70s biker kind of way. Baby-faced Scott LeStrange worked the crowd hard with great comedic timing. Connor Michalchuk is a ginger spitfire who seems to have stepped out of a Del Shores’ play. 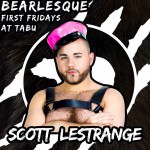 Bearlesque was MCed by Josh Schonewolf who turns out to be one of Philadelphia’s busiest alternative fun producers, also producing more boylesque with the Weird Beard Revue; a gay and lesbian pool party, Drink or Swim; and Songbird, a decidedly edgier version of American Idol.

The boys brought their “dragmother” with them, Bev, who served up WTF realness with a lipsynched phone conversation that grew more frenzied each time she answered the phone. It was sort of Kathleen Turner’s prank phone calling in Serial Mom meets Lypsinka. 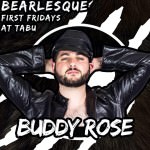 And speaking of lipsynching (see what I did there?), my favorite number of the evening was Scott LeStrange’s brilliantly twisted drag cheerleader number done to an edited track of Fat Amy, (Rebel Wilson’s character in Pitch Perfect) dialogue.

The next Bearlesque will be Tuesday, July 18 at 9:00 PM at Town Dance Boutique. No cover but you’ll want to bring some dollar bills…