The Matty Matthews Foundation is allegorical, historical, funny, and disturbing. Before Citizens United, before the Koch Brothers, before George Soros, there was a simple honest guy called Matty Matthews who handed out cash to help hard-working politicians in tight congressional races. Matty is a friendly, gregarious guy, who gets things done with a smile and a story and a pocket full of walk around money. 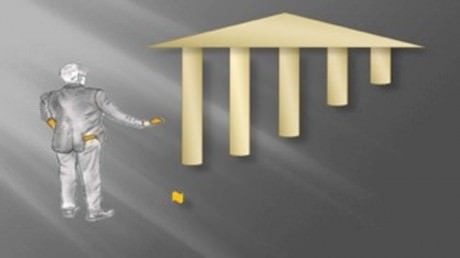 After years as a political “fix-it” man for Congressional leaders and the White House, Matty finds himself alone, camping out in a Washington office building where he has access to a desk, a telephone, and a conference room.  To his surprise, two young new tenants, Willy and Jerry, show up one morning in the men’s room. As Matty, Willy, and Jerry chat about their businesses, they reveal that they are all looking for something just beyond their grasp.

Later that day, Matty’s old friend Mike stops by to ask a really big favor: set up a meeting with a member of the Appropriations Committee for his client Margo, a small time lobbyist with a bling, zing and a lot of ca-ching.

But time and technology passed Matty by and today his form of cash ‘n carry politics is quickly fading away. Before it disappears completely, Matty wants to form a foundation so young people will learn how democracy works, for the good of the people, and how to continue his splendid traditions. Look, Matty believes that young people should understand that if you work hard (get cash to the right people) play by the rules (his rules) you can be a success and give back to America. And Willy and Jerry are there to help all the way. Or are they? This conflict among values, ethics, and world views holds many surprises.

An award winning cast of experienced actors creates an exciting day in the half imaginary, half real world of Matty Matthews. The cast includes Bill Hurlbut (Matty) who graduated in theater  from Miami University and holds a Master of Arts in theater from Ohio State University. An experienced actor, Bill’s credits include dramatic plays, the classics, comedy, and musicals. With fellow actor Jack Wassell, who plays Mike, they reached the finals in the 2014  Mid Atlantic dramatic competition. Malcom Stokes, playing the role of Willy, studied theater at New Mexico State University. He returns to the stage after a three year hiatius in Los Angeles focusing on his film career. Also in the cast is Adrian Vigil who studied drama at the Honors Acting Conservatory at the Theatre Lab School of Dramatic Acts. His credits include playing Bobby in the North of Providence, Little Charles Aiken in August: Osage County, as well as many staged readings. Carol Calhoun joins the cast after playing several roles in community theater with the Rude Mechanicals, the Chevy Chase Players, the Wooster (Ohio) Community Theater, and the Alexandria Parks School Theater in London.

The Matty Mathews Foundation – A production of the Eagle Wings Theater Company premiers at the 2014 Capital Fringe Festival.