If Ernest Hemingway’s The Old Man and the Sea strikes you as an interesting choice of subject for a movement theatre piece, you are where I was prior to seeing The Old Man Never Let It Go at the Atlas Performing Arts Center’s Lab II this evening. I was proved a believer in the captivating nature of this seafaring parable/tragedy novella. Almost all of the technical aspects of this production work toward the same goal, as Performer/Director Hector J. Reynoso takes the helm of this performance in his forty-five minute journey through movement, soundscape, and projection. 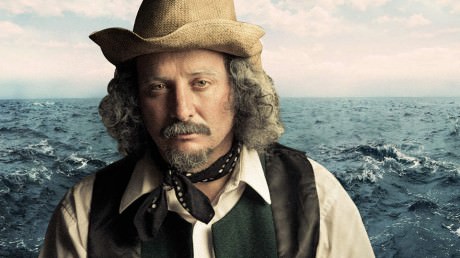 First and foremost, Hector J. Reynoso’s performance as Santiago, the down on his luck Cuban fisherman who serves as Hemingway’s take on Odysseus, is nothing short of captivating. From the first moments of the performance, in which Reynoso is sprawled out center stage asleep, his specific and nuanced stirrings in his dreams elude to the breadth of his physical prowess. Reynoso fully embraces the balance of humility and justified pride in his work that make Santiago such a captivating figure. He traverses the stage space in a myriad of ways, to depict everything from the tonal shifts in mood to the location of the piece. His performance while inside a makeshift boat is extraordinarily graceful, and really captures the qualities of being in a boat on the sea, which is a great feat.

The technical elements almost all work toward the same dynamic goal as Reynoso’s powerhouse performance. Igor Dmitry’s projection design is absolutely breathtaking. The mood and use of color in the projections really highlights the physical work Reynoso brings to the performance. The dream sequences are warm and nostalgic, while the stormy sea sequences are dark and foreboding. The use of movement in the projections alludes to the shifting of the sea underneath the vessel, allowing Reynoso’s movement to go more nuanced than to allude to the waves. Brittany Diliberto’s lighting design provides nice tonal shifts to the piece, to really punctuate the differences. Her use of stark, white light during Reynoso’s moments of hopelessness is spectacularly bleak. Phil Charlwood’s design of the boat used in the piece is stunning, as this set piece glides along with Reynoso with the greatest of ease and has the wear and tear one would expect of a seafaring gentleman’s vessel.

The one aspect that I wish was more congruent with Reynoso’s vision is the sound design. While Konstantine Lortkipanidze’s compositions are wonderfully dynamic and diverse in their own right, they feel, at times, incongruent with the tone of the piece, at least for me. I get a beautifully human depiction of a talented man who is down on his luck from most of the aspects of the production. This description brings to mind organic sounds, with earthy instruments, such as an acoustic guitar, a harmonica, etc. The techno flavor with which Lortkipanidze colors his compositions doesn’t feel harmonious with the beautiful depiction Reynoso uses to color the performance. (NOTE: This critique is fairly specific and only mentioned because this piece has tremendous promise and could be even more deeply affecting, I believe, with a more in sync sound score.)

This is definitely a production and performance you don’t want to miss, and it is delivered by an artist who is not only on top of his game, but has collaborated with like-minded artists with adroit skills in their art forms.