What would you get if you crossed a French High School Musical with some of the characters from The Breakfast Club? You’d get Tomorrow’s Dawn, a bright, original musical in English (with heavy French accents) now playing on stage at the Capital Fringe Festival. Presented by the French theatre company La Pettite Famille (The Little Family), the cast of ten sing, dance, and act their way through this story of teenage love and angst written by Jeff Gallon and Fred Larrieu. Gallon also directs and wrote the book and lyrics while Larrieu composed the music. 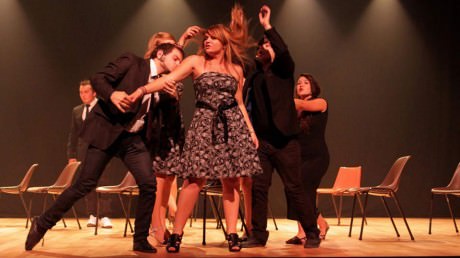 The company features Morgane Cadre, Thibault Dols, Clara Turcovich, Monia Zadri, Martial Dubois, Loic Pujol, Smiljana Kovacevic, Manon Sinaré, Sandra Barbaro and Guillaume Kadri. Cadre plays Alice, a teenager trying to navigate her way through life juggling her boyfriend Tom (Dols), school, and home life. Cadre’s voice is clear and sweet and I looked forward to each of her songs. Dols’ voice is also quite lyrical although there were a few sound issues and it was sometimes challenging to hear the solo voices above the recorded music. I wish I had better understood some of the lyrics because I know I missed some of the show’s humor.

Playing Alice’s father, director and writer Gallon gave us the widest range of emotions as he tries to understand his teenage daughter. Other “grown-ups” make an appearance including the teens’ teacher and a man who has had too much to drink. We recognize many of the teen characters from our own time in high school including the smart girl and the class clown. The actor playing the latter role had several very funny moments, one of which gives new meaning to “talk to the hand.

Unfortunately, much of the singing was uneven and the pace could be improved if the action didn’t stop as actors waited for each song’s introduction to finish so they could begin singing. The actors did show their experience with the material as they moved and interacted well with one another.

The story of this theater troupe is fascinating. They first came together in 2007 while in middle-school in Toulouse, France.  Despite their young ages (16-25), they have performed together more than 100 times, in France, the United States and in 10 other countries and two languages.

Ultimately, this is a story of hope that tomorrow’s dawn will bring everlasting love. And I say, “Vive l’amour!”

Tomorrow’s Dawn plays through July 16, 2014, at The Mountain – at Mount Vernon United Methodist Church – 900 Massachusetts Ave NW, in Washington, DC. For performance information and to purchase tickets, go to their Capital Fringe Page.