Fringe is well known for exposing audiences to exciting new works, but the festival can be equally exciting when it presents a fresh take on a theatre classic. Such was the pleasure of Wandering Theatre Company’s Antigone, a refreshing and visually stunning reinterpretation of the classic Greek tragedy. 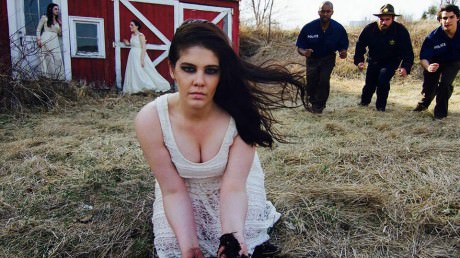 Directed by Natalie Villamonte Zito, Wandering Theatre Company used Jean Anouilh’s 1944 existentialist interpretation of Sophocles’ tragedy, itself a classic of postwar modernist drama. Although Anouilh’s text is more accessible than Sophocles, the language can still be difficult, and it is to Ms. Villamonte Zito’s credit that the show remained consistently dynamic, engaging, and entertaining. The central strength of the show is its innovative staging. Drawing on Anne Bogart’s Viewpoints Technique, Antigone utilized, to great effect, the z-axis of the stage, the line that runs from upstage to downstage. The result was a stage picture that was interesting, sculptural, and chock full of gorgeous tableaus. Together with Jak Prince’s impressive lighting design (no small feat given Fringe’s mandatory, one-size-fits-all light plot) the visual impact of the show was dramatic and surreal.

Although some performances were uneven, the overall quality of the ten person cast was high, and some performances were exemplary. Emily Relva was superb as the titular, giving a performance that was both powerful and nuanced. Likewise, Alex Perez as Guard #1 (who, despite his character’s generic name is actually quite important to the plot) gives an energetic and committed performance. Clemmie Evans and Jenna Krasowski together are the death-like “Chorus”, floating about the stage as they gaze dispassionately on the inevitable tragedy that is unfolding. They provide a much-needed context for the show, and serve as a reminder that at its core, Antigone is a play about the consequences of messing around with supernatural forces. Antigone is by no means bereft of text, but the strongest moments of the show are nonverbal. Several moments of particularly heightened emotion are complemented by highly stylized vignettes composed of movement and light. Particularly adept at the choreographic aspect of the show is Hannah Wolff, who as Ismene is at once fragile and endearing.

Although the story of Antigone is very old (and even the “modern” Anouilh version turns 70 this year) Wandering Theatre Company’s fresh new production deserves your attention. With its striking design, smart staging, and powerful performances, it will serve as an asset to your 2014 Fringe experience.