(Best of the Capital Fringe)
While I was in London a couple months ago, I attended a Punchdrunk Theatre Company production, and the play was like nothing I had seen before. Punchdrunk’s most defining characteristic is that rather than having the audience view a production on a stage, they become part of the performance. Audience members follow performers around the space and experience the story first hand. Last night, I was intrigued to find that Through the 4th Wall Productions captured a similar magic to that of Punchdrunk. While I cannot say that this was their intention in the making of Dream Within a Dream, I do know that I was fascinated by their similarities. 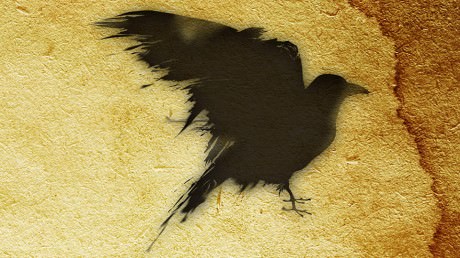 Directed by Nasreen Alkhateeb, Jennifer Schwed, and Doug Bradshaw, the centers on Edgar Allen Poe, and the conflict that while he has been dead for some time, people have claimed to see him walking in town. The Muckrakers are trying to figure out how the mysteries surrounding Poe’s death could lead into the sightings, and it is up to the audience to help them find clues.

The aspect that completely blew me away was the company’s use of space. This site specific performance takes place over two levels of a building, and the audience is led through different areas in order to find clues through the various performances. However, the audience has the opportunity to do more than simply watch two characters perform a scene. They are also asked to explore the set and props, and even personally interact with the actors. I am rarely a fan of audience participation, but the detail and original thinking that went into this production made me want to engage with the space.

The set up of the performance has the potential to create an obstacle for the actors. The lack of barrier between performer and audience member creates for an intimate relationship that could feel uncomfortable on both ends. However, these actors appeared to conquer the task with ease. I was intrigued by each performance, and found myself wanting to engage with the characters so that I could learn more of their story. The scene that particularly grasped me was the interaction between Artist (Adam Johnson) and Model (Christin Meador). The staging of the piece involving Artist sitting stationary while Model danced around him was beautifully crafted, but the actors themselves were also fantastic. I believed their desperation, and was pleasantly surprised to find that even in this experimental form of storytelling, I felt for them, and their inability to make their relationship succeed.

Clever, fascinating, and visually striking, Dream Within a Dream is a must-see event. I only advise that you wear comfortable shoes and arrive with an open mind.