Everything I Do is a musical, loosely adapted from George Bernard Shaw’s Man and Superman by playwright and composer John Becker. Just as the tagline in the promos for the show say, “You’ve never seen Shaw like this.” 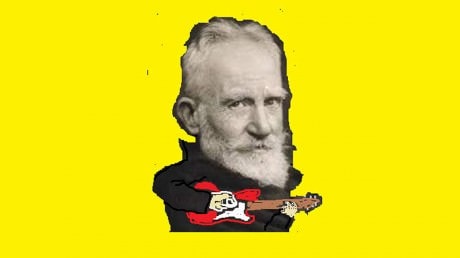 In this version, directed by Brad Porter, Mr. Tanner (Phil Hosford) is diagnosed with cancer and it is his last dying wish to see his sons, Jack (Jared Calhoun) and Hector (David Tuttle) well-cared for, happy, and settled. Mr. Tanner wants Jack to marry the beautiful and whip-smart, Ann (Sarah Welsh), but Jack in defiance to his father, and ignoring his own obvious love for Ann, refuses and insists that Ann and their childhood friend, Octavius (Same Game) are the better matched pair. Jack decides to leave behind Ann, the girl he has loved since he was a child, and his dying father for freedom, for the open road and adventure.

Hector, unknowing to his father has married Violet, who he knows his father will not approve of. When Violet gets pregnant, she and Hector enlist the help of Straker (Tucker Bacon), Jack’s friend, confident, and handyman around the house, to pretend that he is the father. In this way, Violet is assured that Hector will not be cut off from Mr. Tanner’s money.

Can Mr. Tanner sort out the sordid and complicated relationships before he meets his demise? Can Jack overcome his own stubbornness and rebellious nature to see that his father cares for him and only wants the best for him? Will Violet and Hector come clean to Mr. Tanner?

The show is really well-written—the banter is lively and funny, whip-smart and a bit saracastic. The lyrics to the songs had me in stitches. The biggest issue, unfortunately, was the size of the venue. The room was just too huge for the sound system that the group had, I could barely hear the singing. In addition, the transitions between the musical numbers and the speaking parts of the show were very awkward, mostly because the music (which sounded as if it was coming from someplace backstage, really far away) didn’t quite start on cue. The actors would turn to start the song, and have to pause until the music began. There was also live guitarist on stage, which I think may have been better if the show just had that.

I though the actors played their parts with aplomb. I especially enjoyed Violet and Hector’s “Morality” number, where they try to convince Straker that they are really doing the right thing by lying to Mr. Tanner and Phil Hosford as Satan in Jack’s dream has me snickering as I sit here thinking back on it. Jared Calhoun and Sara Welsh both had very lovely voices, and I wish I was able to hear them better.

Everything I Do is a really funny and sarcastic show, and I loved the actors performing in a Gilbert and Sullivan Gangnam style! I am confident that the technical issues will be resolved. I really did enjoy myself, and with a few adjustments, this could be a 5 star show!

Everything I Do plays through July 26, 2014 at Atlas Performing Arts Center—Lang Theater— 1333 H St, NE in Washington DC. For performance information and to tickets, go to their Capital Fringe page