Stephen Mead is no stranger to Fringe—or to one-man shows: his “Dark. Powerful. Mysterious. Magnetic. Suspenseful” performance in Murder on the Bare Stage, as lauded last year by DCMTA’s Veronique MacRae, acquainted audiences with his “truly breath-taking and captivating” ability to bring fictional characters and the world they inhabit vividly to life. In The Man in the Desert Mead takes, in a way, the next logical step. A step right off the edge. 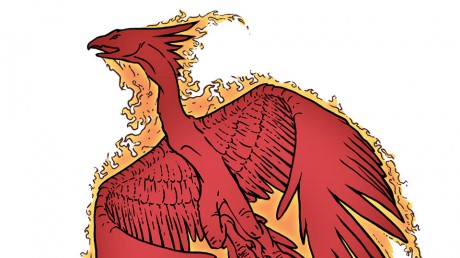 Dressed in black from head to toe, Mead is as skilled in conveying an injured visitor’s contented sip-slurps of spoonfuls of soup, as he is in portraying—in rapidly switching voices, gestures, guises and demeanors—the hair-raising, graphically violent slugfest the man will face at the climax. His disparate characters play with and against a set consisting solely of two small black wooden chairs and four large spots, which shift color and focus to delineate time, place and mood.

Much like the set, the sound effects and music are equally spare and effective, the words “crack of thunder!” illustrated by a crackling explosion, the strings when mystery’s afoot spooky and threateningly sonorous.

As the show is “Not recommended for kids,” I was surprised to see in front of me two preteen boys, one on either side of their mother, who seemed to be taking it all in stride. Curious, I asked her, and found out that they’d already seen it in rehearsal. “They’re already corrupted!” she laughed.

For anyone with a thirst for brilliant characterization, a taste for the ghastly, and action enhanced by athletic, and at times near balletic prowess, there are worse ways you could be corrupted. And not many better.

The Man in the Desert is playing through Sunday, July 27, 2014, at Caos on F – 923 F Street NW, in  Washington, DC. For more information and to purchase tickets, go to their Capital Fringe show page.