Fringe favorite John Krizel is at it again with his new show The Program Assistant, which he wrote, directed, and produced. It is a polished, fast-paced, painfully funny comedy about two recent GW grads living together and applying for the same job. It’s filled with the lightning dialogue and DC insider knowledge that made Krizel’s two previous Fringe outings such hits. 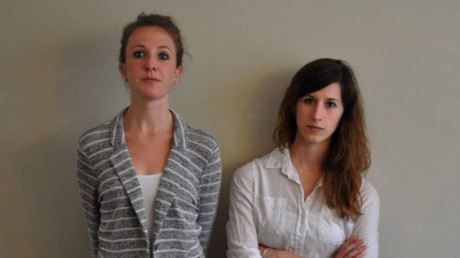 Charlie and Laura (Abigail Casey and Katie Ryan) carry the play as they banter across scenes, most of which last less than a minute, but the supporting cast carry the comedy. There’s Rachel (Amanda Spellman) who is dying a slow death as a waitress, Ben (Aaron Porter) who is getting his PhD in comparative literature, Will (Paul Lysek) the intern, Mike (Steve Isaac) the bartender/occupy protester, Zaree (Milica Bogetic) the boss from hell, and Rich (Zachary Fithian), who may be the only sane member of the piece.  Each is a pitch perfect character study of a variety of DC subspecies, all while social media posts make a sometimes hilarious counterpoint to the onstage action as they are projected on a wall behind the actors, proving once again that the face we show to social media rarely tells the whole truth.

Krizel builds the story slowly and paints the world of millennials with sympathy and just enough asperity to make light of these first world problems. If I had one tip for the production, it would be to simplify the staging. With the scenes as short as they are, actors spent an inordinate amount of time moving a couch upstage and downstage, but that is small potatoes, for when the lights are up The Program Assistant offers a searing, not quite hopeless portrait of the future of this city. If you want to know,  they are currently drinking Chardonnay, eating whipped cream, and heading to their next informational interview.

The Program Assistant plays through July 27, 2014 at Redrum-612 L Street, NW, in Washington, DC. For performance times and to purchase tickets, visit their Capital Fringe Page.