If one way to tell whether a rock musical is really good is that it makes you want to come back and see it again,  The Landless Theatre Company’s Rock Bottom [A Rock Opus] makes the cut and then some. The story is textured and character driven, the book and lyrics are smart and sharp, the music is fantastic. There’s a whole lot to like on first viewing, and the show promises even more the next time. 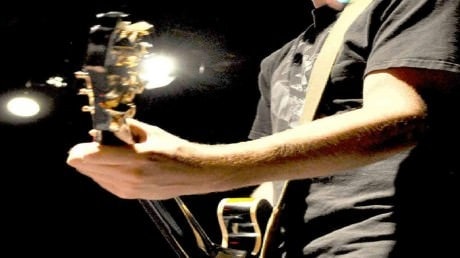 What makes Rock Bottom [A Rock Opus] so interesting and involving is that it’s based on a richly imagined 2009 novel, Rock Bottom, by Michael Shilling, who with Landless Artistic Producing Director Andrew Lloyd Baughman has written the musical’s book. The show’s landscape—raunchy sex, illicit drugs, and wicked rock ‘n’ roll—exudes edgy verisimilitude. The musical takes place, as does the novel, on the last day in the demise of a rock band named Blood Orphans. Once the next big thing, with a release just out on the Warners label, they have crashed and burned, their record assailed for its racist lyrics, their reputation in tatters, their doomed European tour now dead-ending in Amsterdam.

Each of the four band mates has a back story, and each has a compelling character arc. That in itself sets Rock Bottom [A Rock Opus] apart from, say, American Idiot, which played like a nonstop rock concert but whose characters and story lines were all a muddle. By contrast there’s a lot going on with these Rock Bottom lads, and there are several satisfying stretches in the show during which their provocative dramas unfold and no music plays.

Shane, the band’s lead singer (Rob Bradley, whose vocals soar), has recently converted to Buddhism, and his new-found zeal gets on everyone’s nerves. Bass player Bobby has eczema on both hands so he keeps flubbing his licks (Tom Jackson depicts his torturedness to a tee). Guitarist Adam, like the runt of a litter,  bears the brunt of the others’ abuse (Marshall Stone shows the character’s quiet strength beneath his shy). And drummer Darlo is a sex addict whose father operates a violent-sex pornography business in L.A.  As the play opens, Darlo’s dad has just been arrested on suspicion of complicity in a sex-trafficking ring. Darlo’s through line, his determination not to become like his father, commands much of the action (and Greg Bowen plays the wounded son with down-and-dirty desperation plus some howling-good vocal chops).

The band’s manager is Joey, and as played terrifically by Devin Gaither, she’s one foxy, feisty boss lady. Gaither pretty much steals every scene she’s in, so canny and captivating is her performance. No wonder this lost-boy band has followed her charismatic lead.

This being the world of sex, drugs, etc., we also meet the women the guys hook up with (in prostitution and not) in assorted couplings (sordid and not), plus now and then a pimp or drug dealer. We also meet some parents (including Darlo’s porn-king father and born-again mother) and sundry roadies. All of these supporting characters (Talia Segal, Jen Tonon, Kathleen Burnard, Jonathan R. Lovins, Steve Custer, Matt Farkas) propel the story with fascinating flair.

Baughman’s direction is brisk, and though dialog and lyrics sometimes got lost in the Warehouse’s challenging acoustics (so there was more narrative going on than one could catch), the show has unmistakable vision and verve. Especially astute was the choice to keep the musical numbers no longer than needed to make their point in the story—even though many were so listenable they could have gone on. Baughman wrote the music and lyrics; Talia Segal and Michael Shilling are credited with additional material. Two musical numbers were standouts: One was “Sideways,” a lovely duet sung by Adam and a singer he meets named Deena (sweetly performed by Segal), accompanying themselves on acoustic guitars. The other was “Sing the Song Back to Heaven,” Blood Orphans’ final song of their career and the show’s full-cast big finish. It rocked the Warehouse good.

Yeah, I’m going back. Assuming the house is not so packed I can’t get in.

Running Time: About one hour and 15 minutes, no intermission.