Even before the show starts, Stone Tape Party, written by Danny Rovin and directed by Angela Pirko, immerses the audience in the vivacity that is the house where the party never stops. As audience members entered the room, the party is already in full swing with scantily clad drunk girls offering you drinks, pulling audience members up on the stage, impromptu stripper dances, and loud music. You knew you were going to have a good time, whether you were expecting to or not. 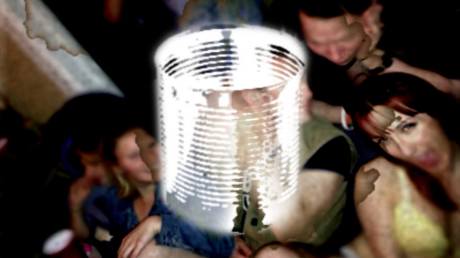 The party is a birthday party for Aedan (Ariana Almajan) who lived, partied, and died of a drug overdose in the group house with Rich (Aubri O’ Connor), Basie (Ben Calman), Jodie (Jill Tighe), and Dusty (Jack Novak). Dusty, who was best friends with Aedan decides that he is finally ready to leave the house, to put the sad past behind him. After another wild night of partying, he begins to see and talk to Aedan’s ghost (or is she just a figment of his imagination?), and he meets a girl, Zoe (Casey Leffue) and for a while, he forgets the sadness and forlornness he feels in the house. As the housemates go from one non-stop drinking, and drug filled night to another, you begin to see that each of them is running away from something in their past, and desperately trying to hold onto the façade of the never ending party, the fun times in the house. In the end, will the house let Dusty leave? Will Basie, Jody, and Rich find inner peace?

I was really pleasantly surprised by how much I enjoyed the show. Every aspect of this show was well thought out and executed. The writing is superb. Its classified by Fringe as a comedy, and that it is. Stone Tape Party is filled with innuendos and hilarious observations, delivered perfectly by the talented cast. But it can also be a drama, a musical, a dance party. This show is so many different things, I don’t think it quite fits into any one category. The music in the show, selected by sound designer Niusha Nawab, sets the stage perfectly and includes a mix of blues, jazz, bluegrass, and club music. If you listen carefully, you will notice that there are sounds, creaks, conversations that happen just off-stage, as if giving the house a voice in the show. The set by set designer, Betsy Haibel, brings me back to my old college days. It is strewn with records, empty beer cans, a super comfy couch, a round folding chair, and a very well stocked bar (that can’t all have been real alcohol, right?).

I had a hard time deciding who was the highlight of the show. I was very impressed with the caliber of the cast, each and every one of their performances was stellar! But I think Ben Calman’s deadpan and matter of fact delivery of Basie’s devilish lines and his roaming around in that kimono robe for the first half was definitely a show stealer! Aubri O’Connor is the best “not really drunk” drunk person I have seen. Or maybe she really was drunk and that really was alcohol in all those bottles. In which case, a double hats off to the cast for their amazing performances while three sheets to the wind!

As I was leaving the show, I heard a lot of good feedback on the show—“Wow,” “That was really good,” “I want to live in that house!” etc. I think part of the reason why the show was so well received, is because we can all relate to the themes in the show—love lost, unattainable love, friendship that last a lifetime, the crazy things that we have done in our youth, and learning to let go of the past and figuring out who we really are.

This one is a definite must-see for Fringe this year! If you don’t want to miss out on a nostalgically hilarious party, you should check out Stone Tape Party.