From the first downbeat of his powerhouse opening song, “It Only Takes One” off of his fourth album Wait, Tom Goss delivered a powerhouse performance to the very last note on Thursday night at Signature Theatre. Despite the rainy and gloomy evening, the acoustic-pop singer/songwriter Goss, dancing about the stage with an ankleboot and his boyish charisma, charmed the audience and stole their hearts with an evening of original songs that showcased the fragility of the human heart and all the ups and downs that love has to offer.

Signature bills the performance as, “an evening of storytelling and song from one of the nation’s top, and DCs own, gay singer-songwriters. Known world-wide for his songs and videos about love, loss, hope and beauty, Tom’s unique perspective brings a refreshing voice in an industry where the status quo is often upheld.”

The packed performance lived up to the hype. In a combination of loose, interactive story-telling intermixed with poignant songs in the intimate setting of the Signature Theatre’s ARK Theatre, Goss demonstrated how he has rightfully earned the affection of his fans and followers.

Tom Goss is well-known in the Washington D.C. area for his acoustic-pop sound that might remind you of Jason Mraz or perhaps Jack Johnson. As a self-proclaimed “guitar toting, power-pop prodigy,” his vocals are sharp, but not nearly as impressive as his thoughtful and insightful lyrics that have propelled him to be a well-known up-and-coming singer-songwriter in the DC area and beyond. His music itself, which is broadly reminiscent of the acoustic-pop of John Mayer, is easy on the ears, but is not without its sharper kick—with glimmers of rock ‘n’ roll and a touch of sassy country mixed in.

After the powerhouse opener, Goss shared a bit more about his background and stories about his songwriting in a stream of consciousness fashion—unscripted, authentic, and real.

Some of his songs start off deceptively slowly, but then build into larger, fuller rock songs with the assistance of his powerful drummer Liz DeRoche.Songs like “Take A Chance” and “You and Me” epitomize his style of music. A favorite was “Worst of Me,” in which Goss embraces cherishing the crazy, “worst” side of love in a song that was reminiscent of an angry, musical tirade. Yet, even when power chords and syncopated drumming take centerstage, the lyrics are still clean and meaningful: “And I swore to be something I never could achieve, but, for you, I will die trying, so pick me back up, it’s time to rise.”

By far, the most memorable moments of the evening were the songs in which we’re able to catch a glimpse of the softer, more tender side of this artist. His performance of “Illuminate the Dark” was one of these beautiful moments. The song, which starts off in a reverberating guitar solo, features Goss singing some of his most beautiful lyrics: “When I hold your hand, it’s my second skin, so I hold your heart like porcelain.”

Honored as the “Best Musician” by The Washington Blade for several years in a row, Goss has also earned a reputation as an LGBTQ activist and spokesperson, which resonates in his music and echoed throughout his set list. As someone who was originally planning on becoming a priest, Goss has used his music to tackle issues like Don’t Ask Don’t Tell and marriage equality. For instance, his music video for “Lover,” tells the story of a male soldier killed in Afghanistan while his husband waits at home—resonating strongly with LGBTQ veterans who were impacted by Don’t Ask Don’t Tell. This music video—and others like it—have formed a core part of his musical and activist repertoire and has led him to be featured on ABC, HBO, and MTV’s LOGO.

Although Goss has built a solid fanbase through his previous three album—which featured deeply personal, heartfelt songs set to lush orchestration and acoustic guitars—the night revolved closely around his newest release Wait, which was released in May 2014. The recent release, which features a full band of top-notch musical veterans, including drummer Liz DeRoche (Cane and the Sticks/The Pushovers), was definitely the highlight of the cabaret performance and showcased his emotional, charming lyrics with a sharper, though still tender, fragility.

Tom Goss may have only performed for one night at Signature, but I wouldn’t be surprised to see him back performing his catchy tunes soon. If you’re travelling this summer, you may be able to check his music out at one of his upcoming tour dates this summer.

In the meantime, be sure to check out the rest of the annual Sizzlin’ Summer Nights Series, which plays at Signature Theatre until July 26, 2014. Signature bills the series as follows: “With a different act each night, there’s always something to keep you entertained! The atmosphere may be cool, but the music’s red hot at Signature’s Sizzlin’ Nights!” Performers include Helen Hayes Award Winner Erin Driscoll (Cloak and Dagger, The Threepenny Opera), the Gay Men’s Chorus of Washington DC, Gannon O’Brien (Miss Saigon), Bob McDonald, Maria Egler, and Stephen Gregory Smith.

Running Time: Approximately one hour and fifteen minutes, with no intermission. 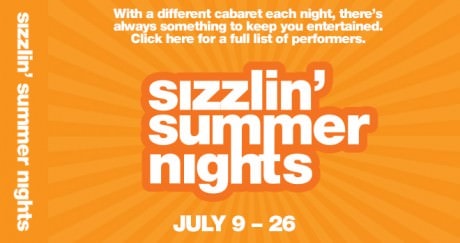