If by 13 Men — A Cabaret you were expecting a beefy crop of men in tights traipsing in and out of the followspot, that ain’t it, kid. The “it” here: marquee-worthy Jack O’Reilly morphing from a stringy, doe-eyed waiter into a smörgåsbord of beefcake. This colorful karma chameleon plays all 13 supporting parts. With and without his shirt. 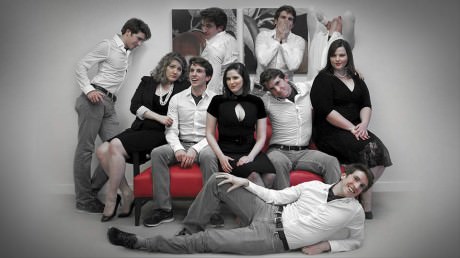 One dude standing in for the entire dirty-rat race? Hmm, Leopard Print Productions might be saying: “Men — they’re all the same!”

Fringe has always been fertile ground for feminist rants, but this tender-hearted roundtable of three gal pals meeting at the bar — OK, Sunday brunch — recounting their most disastrous dates recants any rage. It may even leave you feeling warm, fuzzy and optimistic about the whole messy dating scene.

Credit goes to leading lady and playwright Faith Hayden, who laced this tonic for the brokenhearted with, well, keeping the faith.

She plays Lex, who is mulling over a recent proposal with the obligatory bottomless wine in the audience of Tess (Co-Director Colleen Brown) and Mary Grace (Producer Kendra Keller). Tess is already married and a bit jaded. Mary Grace is Republican and not so much reserved as naïve. The cute-as-buttons trio may be designed as D.C. hipsters, in black dresses with splotches of femme fatale red, but Hayden comes off as a little bit country — Patsy Cline, on point — and Brown complements with a gritty rock ’n’ roll vibe. A little Janis with your Carole King? Brown, by the way, is quite pregnant with twins, which is one reason she has an understudy (Stephanie Hales, at select performances).

All three remind the audience of their own friends, and by show’s end you may feel you’ve made three new ones. In the ladies’ room, in fact, I chatted up a woman who was friends with the cast and swore these dating horror stories weren’t fiction, as she witnessed most of it firsthand. There’s also an interactive/improv element perfect for girls’ night out, as patrons are invited to share their own testimony of navigating dating’s minefields.

Co-Directors Brown and Erin Leigh Hill wring out sincerity and intimacy from the actors, but it’s the groovy combo and interesting “mix tape” tunes that stitch the show together like an eclectic High Fidelity from a woman’s perspective. Musical Director Jason Mendelson doubles on piano and double-barrel electric guitar, while fiddler Tommy Beyea adds heart and soul. Songs careen from steaming duets — The Civil Wars’ “If I Didn’t Know Better,” Dashboard Confessional’s “Hands Down” and Cobra Starship’s “Good Girls Go Bad” — to killer three-way harmonies on “Hell on Heels” by Pistol Annies and Brown’s tortured rendition of “Bill” from Show Boat.

The dialogue may be watered down, the songs borrowed and the highlights in bluish tones, but the dots connect. Possibly Hayden’s biggest stroke of genius, beyond casting O’Reilly, was scoring The Atlas as her venue and setting the show in an actual D.C. bar on H Street, The Big Board, and reprinting its menu in the program.

Get used to H Street, Fringe fans, because its bright lights and bigger beer tents look like the (Great White) way of the future. If for no other reason than sampling the awakened atmosphere of the Atlas District, this Breakup Box cabaret done in Black Box is worth checking out.

Another overwhelming reason: the No. 1 “tool” and Jack-of-all-trades among a cast of alluring distaffs. Even as a commitaphobe, O’Reilly is a blazingly committed actor. His rousing vocals and flawless portrayal of losers in the dating-roulette game is winning.