Jane Franklin Dance is a Virginia based company known for its innovative works and collaborations; Blue Moon/Red River is a prime example of both. Jane Franklin is the artistic director and choreographer and has partnered with Tom Teasley, a percussionist also known for bending the boundaries of his profession. Percussion is such an inadequate word for the mix of digital and physical instruments he plays, including some that seemed to be of his own devising like an erie chime he played with a violin bow. This piece was inspired by native american rhythms and stories. Voiceover from Native American legends play over the loudspeakers and a multimedia display in a lighting design by Elizabeth A. Coco plays in the background, drawing petroglyphs on the wall as the dancers echo their lines. 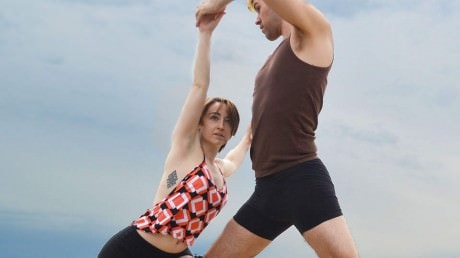 The company is eleven members strong, but it seems like so many more dancers are onstage, each dressed in black with simple earth toned shirts and bare feet and also covered in tattoos which the dancers add to as choreography within the piece. Franklin’s modern choreography is intricate and fills the stage with different studies in movement. She is equally at home with the big complicated numbers that have dancers alternately spinning each in their own movements and coming together in unexpected moments of symmetry to the smallest, intimate choreography of a curled finger. The piece alternates between the company as a whole, duets, solos, and trios as they explore these native american rhythms. When a voice tells a trickster tale, it is impossible not to notice the preponderance of caucasian face onstage, but they treat the stories and the subject with delicacy and respect.

Fringe is gold for discovering the hidden gems of this city and also a chance for artists to stretch their envelope and try new things and this is a banner show for both. These dancers are in top shape and their athleticism and artistry are a pleasure to watch. A particular highlight came half way through as the percussion went almost silent and the it was all about the movements onstage. Another cool moment was when the choreography defied gender and men and women switched parts in the pas de deux and women lifted men and each other into the air before they began climbing other dancers as a step ladder. I also enjoyed how certain movements echoed throughout the piece – tying together each moment.  I was mesmerized as the show flew by.