Eddy Roger Parker both wrote and produced About A Girl, his debut play. The byline is “Drugs, Sex, and Texas.” It takes place in 80’s and is indeed a drama about a girl, her best friend, her boyfriend, and his best friend living their life in suburban Texas in the 80’s. Director Eddie Page has done a fantastic job conjuring up the decade with an endless series of awesome t-shirts from bands, movies, the D.A.R.E. program and more. Matt Williams (Meat McKenzie) is a local, but he sounds like he’s from down South and brings depth to what could be a stereotypical role. Ben Norcross (Ashley) plays his character’s unravelling well, as does Jenni Patton (Justine Courson). Heather Norcross (Jett Briggs) is a standout with her very dry sense of humor. 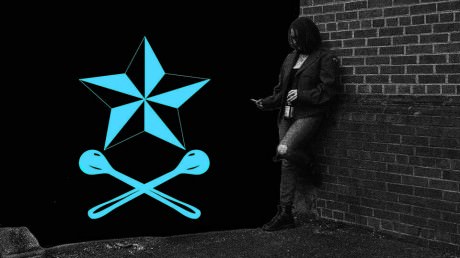 They are all teenagers exploring the darker underbelly of most suburban neighborhoods — spending much of the play drunk or high and dealing with abuse and pregnancy. Parker has a good ear for dialogue and in many scenes he gets in some good zingers. I hope he also explores writing comedy as well as drama because there were some pretty funny moments, which helped lighten the tough topic. Parker doesn’t shy away from a detailed character study of these kids falling apart and trying to pulling themselves back together again. Overall the play shows a lot of promise. In the heat of the action, it’s very powerful, but there are a some over-the-top moments where the story gets lost in the lessons. The play also seems to start at a pretty big emotional pitch and stay there, which leaves less room for the actors to really evolve in their roles. The main strength of the play are these characters that Parker has created with a lot of heart.

About a Girl plays through July 26, 2014 at Goethe Institute – Gallery – 812 7th Street NW, in Washington, DC. For performance times and to purchase tickets, visit their Capital Fringe Page.

Visit their preview article on DCMTA.