Usually when someone tells you a Fringe show is different every night, it means “improv showcase” or “audience participation.” Sometimes it means “we didn’t really rehearse.” Not so here. Persephone, the brainchild of Eames Armstrong (director of Aether Art Projects), is literally a different performance each night. And if the first night is any indication of what to expect, you’re not going to want to miss them. 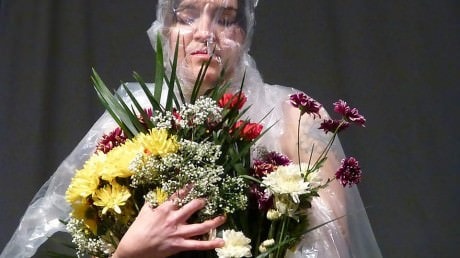 Working with a series of six different collaborators, Armstrong set out to explore the myth of Persephone in a non-narrative, personal fashion. Each night the show bends to the creative whims of the evening’s collaborators, though maintaining a focus on the central themes of “worship, sex, autonomy, violation, cycle, loss, and return.”

Opening night, created in partnership with Jane Claire Remick, was a wordless piece of physical theatre. There wasn’t a set so much as a series of props: fans, plastic sheeting, buckets, a shop vac, a microphone, flashlights, a bucket. Rather than dealing with the details of the traditional story, the performance took place in the aftermath, reimagining the yearly cycles of death and rebirth as necessary steps towards both world-building and personal recovery. I’ll admit that some of this comes straight out of the program, while the rest is my personal interpretation of the performance. This kind of theatre is necessarily interpretive, and Armstrong and Remick have the advantage of a rich vocabulary of symbols. Emergence, burial, planting, growth, harvesting, eating, chewing, spitting; even without the Persephone-myth in mind, there’s so much for an audience to latch on to. As it stands, each new set of actions caused a reassessment of what had gone before, the idea of what the performance might be reshaping again and again.

Towards the end of the piece, Armstrong stands in front of the audience – nude, flowers taped to her body – as the house lights come up, taking the time to meet the eyes of the people who have been judging and assessing her for the last hour. It’s a powerful moment, turning the audience’s gaze back on itself and questioning a myth that uses the suffering of women to explain the turning of the seasons. Persephone is Fringe-y in the best ways: it’s really, really smart, and really, really weird.

Persephone plays through July 27, 2014 at the Bedroom at Fort Fringe – 612 L Street, NW, in Washington, DC. For performance information and to purchase tickets, go to their Capital Fringe Page.