Wouldn’t it be great if we could all have some stellar, successful person be our own personal mentor? That’s what Annie (Catie Carlton) and Tinley (Larissa Kruesi, also one of the two playwrights) find in comics Amy Poehler and Tina Fey. Annie and Tinley are two young, stuck-in-a-rut twenty somethings trying to find love and success. One day the two roommate s are sitting around lamenting their aimless lives and decide that they would live their lives according to what Tina and Amy would do, because, in the famous words of Tina Fey, “Bitches get stuff done!” 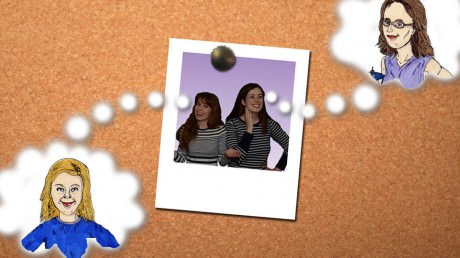 The two girls decide that when they are not sure what to do, or doubt themselves they will ask themselves what their “mentors” would do and act according to that. Tinley meets a guy, Brad and they begin dating and the girls begin to believe in the “power of Tina and Amy.” But as the rude, jealous side of Brad begins to rear its ugly head, will the friendship between Tinley and Annie survive? Will Tinley see that she is better than she thinks and go after her dream job or stay a receptionist? Will Annie go after the solo in her dance company? Will she get the respect from the dance company that she so deserves? Will having Tina and Amy as their imaginary life coaches be an advantage or a liability.

I enjoyed the show, I thought Kruesi made the slightly ditzy Tinley very believable and Carlton as the more level-headed Annie was perfect. The quick wardrobe changes helped to ensure a sense of freshness. What I did find a little distracting was the very short scenes of 1-2 minutes each. It made the show seem a little disjointed. I did like that each scene, even the very short scenes, there is some sort of action and it moves quickly along. Never once did I feel like the story was dragging. I think some of the scenes may be re-arranged in a way so that there are not so many very short, choppy, scenes in sequence. I was also a little disappointed that the show was not as funny as I had expected….it is a show based on the great comedic team of Tina Fey and Amy Poehler. I thought I would be holding my belly in laughter. Instead what I got was a rather smartly written story of two young girls trying to find their way in the world—a story of love, of friendship, and of courage.

What Would Tina and Amy Do? plays through July 19, 2014 at  Bedroom – Fort Fringe – 612 L Street, NW, in Washington, DC . For performance information and to tickets, go to their Capital Fringe page.