Christopher Walken (for those who live under a rock) is a prolific American performer of stage and screen. He won an Oscar playing Russian Roulette with Robert Di Niro in 1978’s The Deer Hunter, and single-handedly won a Tony in 2010’s A Behanding In Spokane by Martin McDonagh. He is a pop-culture icon known for (among much more) telling an uncomfortable story about a watch in Pulp Fiction, taking flight in the Spike Jonze-directed music video for Fatboy Slim’s Weapon Of Choice, and (of course) as the incomparable record producer Bruce Dickinson feverishly demanding  for “more cowbell!” 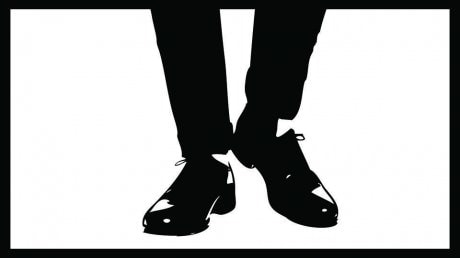 If you watched any of the above clips, you might have noticed Walken’s signature vocal delivery (well…except for Weapon of Choice, but you should watch that one for his impeccable dance moves.) What’s even more likely is that Walken’s voice has already found its way snug inside your mind like a gold watch.

For some, Christopher Walken impressions are a simple punch-line or a well-timed pop-culture reference, but in Ruben Rosthenhausler’s premiere comedy Walken In His Shoes (which he also co-directed, alongside Leah Rosthenhausler) the four men of the CWC (that’s the Christopher Walken Club) turn imitating Christopher Walken into a way of life. Imagine their surprise, then, when a young woman “walks in” (get it? Okay, I apologize for that one) on one of their regular meetings…and right as they’re preparing for The First Annual Walken In His Shoes Pageant, no less.

I wasn’t scheduled to see Walken In His Shoes, but was called early afternoon to pinch-review the show and jumped at the opportunity. I spent the remaining part of the afternoon perusing clips on youtube of the man himself, trying to figure out what it is about him exactly that is so captivating. After all, if you take the man at surface level there is nothing about him that screams “movie star.” He’s got thin billowy hair, he doesn’t blink enough, and that voice? Come on…seriously? After my “extensive” research, though, I posit that it is precisely those things that make Christopher Walken so endearing. He is, when all is said and done, himself through and through. His honesty-in-oddness is what makes him both so fascinating and so versatile.

The best parts of Walken In His Shoes mirror the man in this respect. The script is full to the brim with wordplay of all kinds – and not just on the word “Walken” (though as the title might suggest there are some of those as well.) The audience often found themselves groaning through Rosthenhausler’s many set-ups and punchlines, but his and the rest of the cast’s dedication to their peculiar brand of humor sells their jokes through the groans most of the time. If a joke didn’t land, it was often due to over-explanation. A cry of “WWCWD!?” was followed by laughs that were then lost when the acronym was further spelled out explicitly, as though it could mean something else in this context.

CWC member Hi Ho (Michael Howell) pulled yeoman’s duty at delivering Rosthenhausler’s puns, always following them up with a signature catchphrase. Both Rosthenhausler and Howell seemed to appreciate that sometimes the simple act of telling a joke is more important than actually getting the laugh – that sometimes you have to make the crack for no other reason than it was begging to be made. This kind of “if you build it, they will come” attitude toward comedy pays off for the audience, eventually. Howell’s persistence whittles down your defenses until you can’t help but laugh along with him.

Twitchy CWC Chairperson Jerry Lipkin (Brandon Howell) endeared himself with an awkwardly heartfelt tribute song to Walken, donning a wig that resembled the man’s hair in no other respect but sheer volume. Here was a man so moved by idolatry that he had to perform this song in this way, despite his nerves and lack of proper costume. The seemingly out-of-place CWC member Spider (played by Ruben Rosthenhausler) earned applause with a charismatic Blue Öyster Cult cover, on the cowbell (obviously). Rosthenhausler timing in this scene was on point – egging the audience on with slowly building donks of the cowbell that escalated into an energetic and entertaining dance routine.

As with Walken’s voice, the overall pacing of the production and story arc was sometimes a little…off. With a script chock-full of jokes, the cast sometimes fell into the rhythmic trap of simply setting them up and knocking them down without the all-important build of tension required to truly make a joke land. In that same vein, the story arc sometimes loses focus in the haze of punchlines. With Ruben Rosthenhausler pulling double duty as playwright and co-director, the production may have benefited from a single outside eye in the director’s chair.

That being said, it’s important to remember that Christopher Walken too has made mistakes – after all, he did make Gigli. Walken is notorious for his “never say no” attitude toward work that comes from a deep-seated love of all things performance. So too, I think, is the case withWalken In His Shoes – if there are rough moments (and there are), the Rosthenhauslers and their cast’s great love for what they have to offer still comes through to entertain. They put their pants on just like the rest of us, one leg at a time. Except once their pants are on, they make gold comedy.

Walken In His Shoes plays through at Redrum – Fort Fringe, 612 L Street NW, in Washington DC. For performance information and to purchase tickets, go to their Capital Fringe Page.