Bowie Community Theatre’s production of Sex Please We’re Sixty, is an American farce of charming, vivacious, and funny explorations into the libidos and trysts of men and women over a certain age who are still trying to prove they have it what it takes to be—ahem—amorous!  While the title might make you initially cringe and the naughty jokes and unseemly inferences can conjure images you’d rather not imagine, the raunchiness seems to work—making the play and the cast at its best!

Written by Michael and Susan Parker, Sex Please We’re Sixty was first produced by Play With Your Food Productions in Hemet, California on October 17, 2008, and is produced by special arrangement with Samuel French, Incorporated.

Directed by Jerry Gietka, produced by Cynthia Bentley, and Assistant Directed and Stage Managed by Portia Bagley, the play opens to mid-afternoon in present time at Mrs. Stancliffe’s Rose Cottage Bed & Breakfast, located somewhere in New England. Sound Designer Gerry Gietka picks the perfect song as Frankie Valli and the Four Seasons “Walk Like a Man” belts out to the audience. Set Designer Fred Bentley purposely opens with a simple set, complete with a comfortable and unpretentious couch, desks and buffet, and Set Construction Supervisor Patrick Ready completes the set with three doors to access guest rooms, where a lot of the offstage action occurs.

Lighting Designer Garrett Hyde and Walter Kleinfelder are very effective as they mirror the moods of the actors as the scenes intensify or diminish, and are assisted by Stage Technician B.C. McKinney and Theater Techs Peter Dursin and Al Chopey. Set Painting Supervisor Jennifer Harvey and her crew lend soft spring coloring of the walls and windows, and Set Dressers Cynthia Bentley, Jennifer Harvey, Faith Leahy-Thielke and Justyne Hughes made the B&B seem homey and comfortable.

Stancliffe (Nina Harris) is the prim and stern owner who owns a successful business where the guests (mostly women), return year after year. Here is where Gietka sets the tone for the play as he show the reluctant Stancliffe loudly bemoaning the sexual conquests of her next-door neighbor, “Bud the Stud” Davis (Bill DeBrason), an unabashed lothario who thinks he can literally charm the socks (and clothes) off any woman. He talks about sex..a lot. Notwithstanding Bud’s questionable capabilities, Stancliffe accepts the idea that Bud is good for business.

Stancliffe’s other neighbor, Henry Mitchell (March Rehr), plays an affable, mild-mannered retired chemist who has been asking for Stancliffe’s hand in marriage for 20 years. While laboring in love, he creates a blue pill called “Venusia” to increase the libido of menopausal women. Adding to the mix of female guests are Victoria Ambrose (Joanne Bauer), a romantic novelist whose romantic life is stalled and she can’t seem to meet that literary deadline; Hillary Hudson (Anne Hull), a beautiful, sophisticated and well-educated woman who is Henry’s former co-worker and friend; and Charmaine Beauregard (Barbara Webber), a Southern belle whose fiery and independent personality shows there is no need to charge her libido!

The actors make a lot of effort to deliver their lines with dramatic emphasis and swagger, and they also employ exaggerated facial expressions as the audience strives to know their true intentions. These characteristics are especially evident in the rollicking and twisting plot when Bud surmises that his amorous attentions are greatly appreciated by the three female guests. The yet-untested Venusia pill becomes the object of Bud’s desire, but this blue-beauty promises more than he ever anticipated. As Bud attempts to ply his charms with renewed vigor, the joke’s on him, the tables are turned, and his amour produces not “Bud the Stud,” but “Bud the Dud.” As a result of some rather unorthodox apothecary techniques, it brings a Kleenex-snatching-to-your-watering-eyes hilarity as the actors take on—and become–whole new sexual personas!

Between hot flashes, bursts of emotion, and downright bitchiness, each of the sexes takes a walk in the other’s shoes, while also giving each character a window to the world they have yet to explore – themselves – outside the pressures of sex.

The surprising revelation? Well, you just have to come see this play and find out for yourself.

Sex Please We’re Sixty is funny and charming, and the actors truly put their hearts and souls into a topic that is rarely discussed, but which requires laughter and light-heartedness-just the same. 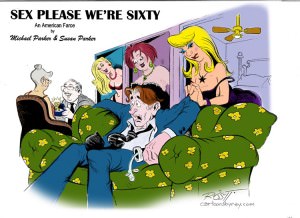