Balloon Plays is a great way to introduce kids to the wonders of Fringe. It is, to my knowledge, the only offering directed towards a younger audience. The approximately 10 kids and 40 adults attending the first performance were delighted by the shenanigans of the three clowns, Kolleen Klintz, Rachel Hynes, and Nora Achrati. Balloons were flying and each participant had the opportunity to claim their own. Kids who made their way into the performance space were welcomed and encouraged to play along. 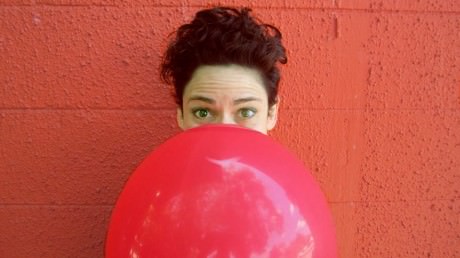 The beginning of the program drew plenty of mirth as the clowns performed slapstick comedy with the balloons. Even standard activities of rubbing balloons onto one’s hair until the hair flew up were made funny by the competitive nature of the game and the facial expressions of the clowns.  After much humorous trial and error, a balloon-made human form emerged.  This ‘human’ regularly appeared, having interactions with a butterfly, seagull, and sea creatures including fish, octopi and crabs. These scenes drew oohs and ahhs from all age groups. The influence of director and veteran performer in Cirque Du Soleil, Elena Day, was really evident at those times.

Hilarious illustrations of what one could do after graduating from Balloon University included prancing around the ‘Institute of High Fashion’and eating sushi. My favorite was viewing famous artists’work at the ‘Art Institute.’ Among the paintings created by balloons were the Mona Lisa, and work by Jackson Pollock and Picasso.

The theme from 2001 A Space Odyssey was used to great effect. Two clowns held long balloons, raising them over their heads as they hummed the theme. At the climax, the third clown beat them in the rear with two balloons in time to the drum part of the theme. Everyone, including young children had a good laugh.

One of the remarkable things about the spirit of Balloon Plays is that all three clowns are usually very serious actresses. In this production they seemed like post birthday party moms who hit the sauce a little too hard then began to play around with the left over balloons. This gives great hope to us mothers of multiple children who don’t know how to unwind after such events.

Thank you Brett Steven Abelman for coming up with such a delightful romp!

Running Time: 55 minutes, with no intermission

Balloon Plays plays through July 27, 2014 at the The Shop at Fort Fringe – 607 New York Avenue, NW, in Washington, DC. For performance information and to order tickets, go to their Capital Fringe Page.