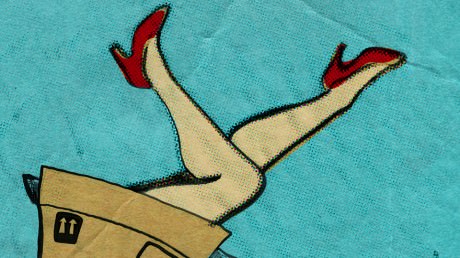 A young married couple in their late twenties—Ron (Grant Cloyd), a laid-back architect, and Kate (Anna Jackson), a hyper-driven broker—are on the cusp of conceiving their first child. They’ve talked it through tactically, they’re about to embark on an island vacation to prompt it, they’ve planned a move to a bigger apartment, and they’re all ready and set to go. Except they’re not. Not really. Because, as it turns out, these yuppies are having heebie-jeebies about becoming mommy and daddy.

Ron’s impulse is to inventory the stuff, methodically. Kate’s is to freak out. Bookending their uproarious ensuing blowup are two characters who function as comic foils. Vanessa (Morganne Davies) is Kate’s hippie-dippy sister, married with three kids to a man whose extramarital flings she’s made inner holistic peace with for the sake of family cohesion. To Vanessa the porn’s no prob, and Kate should just chill. Sherlock (Will Hayes) is Ron’s friend and a randy bachelor pick-up artist whose own apartment in a messy man cave. To Sherlock the porn is an opportunity to fap, and all Ron needs to make it happen is a VCR.

Running Time: About one hour and 20 minutes, with no intermission.