Status Report:  Not a Robot Theatre Company’s Girl in Space is not your typical “boy meets girl, girl meets asteroid, girl loses asteroid, boy loses girl” story although it is pretty much the perfect Fringe show.  It’s like an indie, hipster sci-fi flick come to life onstage – like if the Yeah Yeah Yeahs decided to write plays instead of songs. 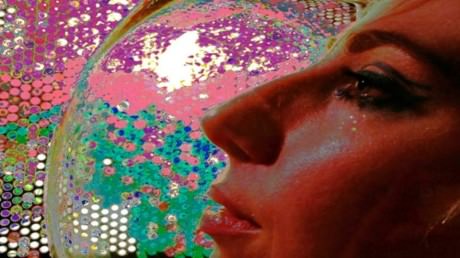 “The use of the audience risers is strictly prohibited during this production.  Please join us onstage.” is projected on the backstage wall as you enter.  It’s a little weird at first but it really engages the sense of playfulness prominent throughout the show.  It didn’t just  smash down the fourth wall between performers and audience, but between audience members as well as new folks came in, got comfortable onstage and started chatting with each other  We were all taking this ride together!

Performers Jacy Barber and Jason Patrick Wells are the perfect visual complements to each other:  she with a platinum pixie haircut in silver spandex and he with his mutton chops, 50s scientist glasses and asteroid baseball cap.  They start the show by very enthusiastically dancing out to strew the stage with brightly colored cubes of different sizes and color-changing fiber optic bouquets, looking sort of like an artful explosion in a Rubik’s Cube factory.  Then she is wheeled out, asleep under a silver mylar blanket.  She wakes to start yet another day in space.

We watch her from the stage periphery as does his character, literally from the control panel as he’s running sound and video projection from a table onstage.  She pushes a button on a cubist computer to let us know what she wants or how she’s feeling and the ship’s computer, voiced by Ryan Gardner, relays the message.  The computer provides her food, toys and a lot of tv, mostly cartoons, but also upon special request My So Called Life (she really, really likes Jared Leto – but then again, who doesn’t?).  In exchange, she has to report on what she sees outside her spaceship window with the utmost scientific seriousness.   And repeat.  Until one day an asteroid crashes into her ship.  Is she alarmed?  Panicked?  No she’s thrilled, infatuated even.

I won’t give any more away other than to say if the Best of Fringe included coolest show this one would be a shoe-in.  Oh and there’s puppets.  And an awesome soundtrack ranging from Ty Burrell and Neutral Milk Hotel to the Ronettes.  And …