Before the show even begins, four dancers in full-body spandex suits float and twirl across the stage of the Lang Theatre. Vast and sparse, the set (designed by Thomas Carter II) for Mary Stone Hanley’s The Name Game is reminiscent of existential plays of yore. This is partly true, as The Name Game does indeed ask big questions about why we are here and who we allow to define our identity. But this is no Waiting for Godot – The Name Game is a vibrant, colorful piece, utilizing comedy, spoken word, and the aforementioned Spandex-clad dancers to tell a story that is by turns surreal and inspiring. 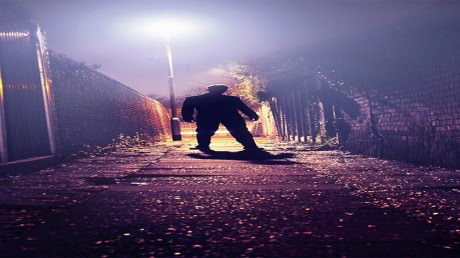 Mary Stone Hanley wrote The Name Game as part of her work as an “artivist,” using theatre to probe questions surrounding social justice. In a last minute casting emergency, she also played the lead role of Eartha in Saturday’s performance, an ethereal old homeless woman who is never quite what she seems to be. Although Ms. Hanley performed the part with a script in her hand, she gave a nuanced and compelling performance nonetheless. As a sort of urban guardian angel, she probes the “young blood” Ezone (Shawn Sebastian), who stumbles into Eartha’s alleyway abode while he’s fleeing from the cops. As Ezone becomes increasingly interested in what Eartha has to say about poetry, identity, and life itself, he begins to open up. We learn about his story through flashbacks, and in turn, Ezone learns more about himself.

The flashbacks to Ezone’s family life are usually compelling, helped by strong performances by Micha Green (Ezone’s mother) and Christopher Dinwiddie (Deacon). The real meat of the show, the present-day interaction between Eartha and Ezone, sometimes lapses into circuitous dialogue that at times retreads ground already explored. However, it also provides moments of humor, suspense, and poignant emotion.

In the last quarter of the show, the staging takes a dramatic turn into the surreal, and this is where The Name Game is most effective at delivering its message. The four dancers (Harrison Michael Walker, Corey Best, Brittany Caldwell, Larvita Legrand McFarquhar), choreographed with superb energy and grace by Reggie Glass, deliver a powerful performance. Likewise, Shawn Sebastian offers a surprising burst of spoken word genius towards the end of the show, and a thrilling light design (by Thomas Carter II) complements the exhilarating climax of the piece. Although the final moments are a little too tidy, the Name Game is ultimately effective at posing the questions it wishes to ask. As Eartha provokes Ezone into asking tough questions about who he is, the audience asks these questions about themselves, and this, in itself, is a victory.

The Name Game plays through July 26 at the Lang Theatre in the Atlas Performing Arts Center, 1333 H Street NE, in Washington, D.C.  For performance information and to purchase tickets, go to their Capital Fringe Page.