(Best of the Capital Fringe)
Welcome to Franz Kafka’s bizarre and tortured world, in which the desperate fight for survival turns men into animals and animals into men, and in which, “human freedom is a mockery of a holy Mother Nature.” 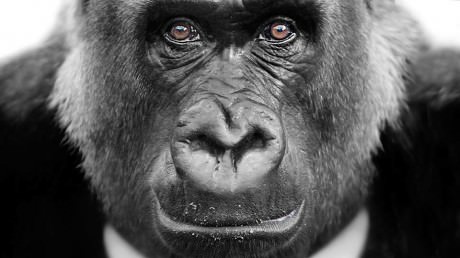 What could be more bizarre than an ape, who in order to stay alive decides to behave like a human and once his transformation is complete, relates his experience to a group of scientists? What could be more rewarding for a Washington theatre goer, than seeing Robert McNamara, Artistic Director of Scena and expert on international theatre, transformed into a chimpanzee pretending to be human?

If you a fan of the ‘Kafkaesque,’ in a mood for an extraordinary parable of survival, or just want to see McNamara channeling the proverbial missing link, you cannot miss Report to An Academy, and its stimulating and entertaining adaptation by German director and Scena Theatre dramaturge, Gabriele Jakobi, who also directed the piece.

Dressed in a dark suit, tie and a hat, with a walking stick ‘glued’ to his hand, Red Peter (Robert McNamara) makes a strong and impressive entrance despite his limping, an aftermath of being hunted down by humans in Africa. Serious and composed, he commences his monologue with confidence and poise. What a feast to witness such a grotesque yet arresting sight. I waited with anticipation for the first signs of apishness, however subtle, curious as to how Jakobi and McNamara decided to manifest the animalistic traits. It is not long before Red Peter becomes completely absorbed in telling his incredible story and starts giving away his true genesis by making more or less subtle ape-like gestures, sounds, expressions, and movements, which are a treat to watch.

Monodrama, theatre’s most challenging genre, rests on the shoulders of just one actor, who as if under a microscope, is subjected to constant attention and scrutiny of the observers. Expertly directed by Jakobi, McNamara, an experienced stage, film, and TV actor, sails through the performance with ease, smoothly interplaying with the demanding text, props/costume (by Roy Spahn), music/sound (by Denise Rose) and the lights (by Marianne Meadows) within the minimalistic set consisting of a desk, chair and a stool. There are moments though; he does not seem to be alone, as his walking stick, which he rarely puts away, seems at times like his conjoin twin.

McNamara’s role is as demanding for him as it is rewarding for the audience. Without revealing too much of the artistic feast that awaits you, let me mention the carefully selected music, which oscillates between the vaudeville and reflective to illustrate the highs and lows of Red Peter’s captivating tale and accentuates his emotions. Watch out for the Chaplin like moments in which the protagonist draws on his experience as a vaudeville performer, and the moving, silent ones in which he self-reflects on the painful past in captivity.

Report to An Academy, written and published in 1917, is one of Kafka’s many works portraying alienated heroes forced to take desperate measures to escape their unbearable existence in the absurd and prison-like universe. It is also one in which the author channels his own experiences of alienation and anxiety, as a social outcast living in-between two cultures and as a frustrated son suffering under demands of his dysfunctional family. Kafka cleverly brings a talking ape to a podium to put a spotlight on universal problems of existence, vulnerability of animals, and the brutality of the human race.

Red Peter is a symbol of a victim turned survivor, wounded, alone, and trapped, yet strong, clever and resilient enough to get himself out of the seemingly impossible rut. “One learns when one has to; one learns when one needs a way; one learns at all costs,”says Red Peter with conviction, “I have fought through the thick of things,” he repeats with passion. He comes across as both a loser and a winner, trapped between two worlds, belonging to none. Does he see animals more fortunate than humans as far as freedom is concerned? Does he, an ape, see himself superior to his first teachers, the drinking, and spitting captors?

There have been many noted interpretations of Report to An Academy. The story has been associated with Darwin’s evolutionary theory, used in the context of animal rights, and compared to assimilation of immigrants into a new culture. “As you experience Kafka, explore life’s meaning, free will and animal rights in the life of the former ape, Red Peter” – encourage the creators of the show. Come and be mesmerized by this extraordinary and dynamic performance and let yourself be drawn into Red Peter’s fascinating story!

Scena Theatre’s Report to An Academy plays through July 27, 2014 at Caos on F – 923 F Street, NW, in Washington, DC. For more information and to purchase tickets, visit their Capital Fringe page.