Sage of Blackwell is a good example of the Capital Fringe Festival’s mission to provide “a showcase for…raw and authentic live performance work.” The world premiere of the drama from Lena Productions tells the story of Runyon Law as he moves from line worker at a large aircraft manufacturing plant in Oklahoma to union activist and leader. 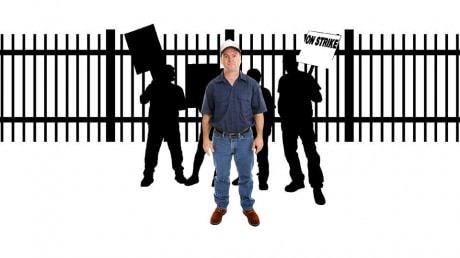 The production offers a talented cast with standouts Patrick M. Doneghy as Darryl Turner and Valerie Holt as Ruby Frazier. Both are experienced actors in the DC area. Doneghy was nominated for a Helen Hayes Award in Keegan Theatre’s The Full Monty. In the role of one of the union activist’s best friends, he personifies the challenges faced by a union man just trying to get by. His impressive performance helps to give the play a firm foundation.

Holt has been acting in local productions since she was young and played the Little Girl in Tantallon Community Players’ production of Ragtime. Her experience shows and she brings a freshness and energy to the stage in the somewhat underdeveloped storyline of the mutual attraction between her character, a strong union supporter at the plant, and Runyon Law who is known as the Sage of Blackwell. Holt has a great stage presence with an expressive face that delights.

Bob Hurley in the title role seems less comfortable in his part. He never let go of his green “union handbook” that was, I suspect, the script, referring to it often. While the 75-minute show covers almost thirty years in the life of Runyon Law, the character never seems to be transformed in any way. In fact, he utters a line saying that people don’t really change and this static aspect to the character was disappointing. Even as major changes take place around him, he seems unaffected.

Rasik Ohal brings both strength and vulnerability to his performance as Paul Gilligan, the union man whose leadership is ultimately usurped by Law. The cast is rounded out by Benjamin Harris, Steve Langley, and Clayton Pelham who play multiple roles but are successful in differentiating the characters.

Written by Arthur M. Luby and directed by Angelisa Gillyard, the production makes effective use of the small stage with photos on the screen behind the stage helping to give a strong sense of place and time.

In a world premiere of a show such as this, the writer, director, and actors are often still exploring the material and venues such as Capital Fringe offer the opportunity to present in front of an audience and determine strengths and areas for growth. For the audience, we have the opportunity to see a creation in its earliest stages. It will be fun to see how future iterations of Sage build on the knowledge gained during this run.

Sage of Blackwell plays through July 26, 2014, at Main Stage – Goethe Institut – 812 7th Street NW, in Washington, DC. For performance information and to purchase tickets, go to their Capital Fringe Page.