Upon reading the short blurb attached to Sasha Sinclair’s new solo performance piece Self Portrait here, I must confess I found myself a bit curious. Armed with my extraordinarily limited knowledge of painting and studio art in general, I snooped around the internet for any digital footprints Sinclair’s work might have left. What I found was her website here, and I took a few minutes to look at her work. 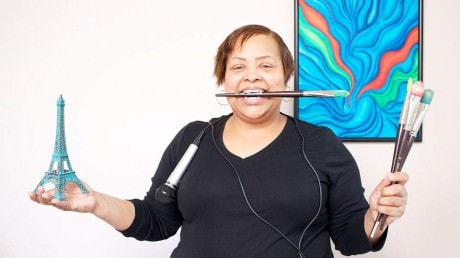 Sinclair’s oeuvre, for the most part it seems, includes abstracted landscapes and florals full of flowing lines and vibrant color. While her landscapes are pretty and colorful, for sure, but nothing about my viewing through the internet awoke that little spark of inspiration in me that occurs when you know you’ve seen something worthwhile.

Sinclair’s Self Portrait, however, is most certainly inspiring. Directed by Regie Cabico, Self Portrait is an autobiographical solo performance in which Sinclair reflects upon the catharsis her life as an artist has provided her against a life full of turmoil. Cabico, I think, states it well in his director’s note when he says, “[Self Portrait is] a graphic novel full of colorful characters and a hero’s journey where the visual and performing arts become Sasha’s weapons in the presence of the wounded world of her family and the graces within her chosen family and her many audiences.”

From the beginning, Sinclair and Cabico ensured that for the duration of the performance, there in that room, I felt like a part of their chosen family for a time. There was no pretense of a fourth wall – when I entered the space (I was the first one), Cabico himself invited me to find a seat on the right of the house where the air conditioning was blasting. When Sinclair entered the space, she announced herself with a sincere, “hello!” to which the audience immediately responded without question. During a moment of dark humor, the audience tittered, to which Sinclair immediately responded with, “go ahead, it’s okay to laugh!”

Credit for this welcoming tone must in part, I think, go to director Regie Cabico. A self-proclaimed Neo-Futurist, Cabico’s program bio indicates that he has won three New York Innovative Theatre Awards for his work with Too Much Light Makes The Baby Go Blind. The Neo-Futurist tendency to unite the performance and the audience in the same space, in Cabico’s words to “not suspend disbelief,” comes through loud and clear in Self Portrait with much benefit to the performance overall. While there are some one-off moments of awkward stagecraft, an abruptly cut sound cue or a muddled beat shift, it seems to me that they are only there because Cabico was too busy keeping his eyes on the bigger picture, painting as Sinclair does – with broad, colorful strokes.

Setting this intimate atmosphere was crucial for what followed. Sinclair’s performance takes us through her life in art from the very beginning, sharing with us her greatest highs and confessing to us her deepest secrets. Sinclair’s stage presence was as vibrant as her landscapes, bouncing in and out of family members and close friends but always returning to her own, honest voice. At times, Sinclair seemed to nervously trip herself up – throwing in an occasional “um” or seeming to fish for the right words. To her, I have this to say: you have nothing to be nervous about. Your story is captivating, and you tell it with charm and vivacity. In that same vein, because the intimate atmosphere had been so carefully crafted I’m sure my own presence in the audience scribbling in my notepad didn’t do away with any butterflies (interestingly, on my way to the theatre I ran into a friend on the metro who upon my explaining where I was going commented, “you’re a critic? That’s good, You look very critical.”)

Meanwhile, throughout the performance a conspicuously covered canvas sat upstage begging to be revealed. Behind the cloth was the final act, Sinclair’s eponymous self portrait. After the performance, I took a moment alone with the painting, and when you go – and please, do – I suggest you do the same. It breaths Sinclair’s exuberance for art that grows all the more palpable after her performance, after she has confided in you what exactly it is the joyous painting stands to defy.

Self Portrait plays through July 26, 2014 at Gearbox -1021 7th Street NW, in Washington, DC. For performance information and to purchase tickets, visit their Capital Fringe Page.