Just when I worried this year’s fringe was veering more mainstream than ever before, I found myself at Barking Fish Theatre Project’s surrealistic W3. Suddenly, there was garbage puppetry, and stark backlighting that obscured facial expressions for 2/3 of the show, and beached whale scenery singing “My Bonnie Lies Over The Ocean.” But was it… good? 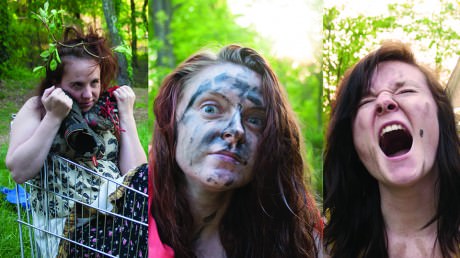 Before I render my verdict of W3, allow me to make two disclaimers.

First, in the minutes before the show, I found myself privy to the loud conversation of two gentlemen sitting in front of me. They were ticking off the various Fringe productions they had seen so far, quickly dismissing each as though ranking swatches of curtain for the second guest room, with comments like “[Show X] was very professional for fringe, but it wasn’t exciting,” and “[Show Y] was extremely amateurish, but it was earnest and sort of fun.” They even went on to criticize this website: “DCMTA reviews are useless. Everything is 4 or 5 stars. Anyone can put crap on stage and get 4 stars.”

Second disclaimer, I have no idea what W3 was about. I watched all 70 minutes of it, but can’t make a lot of sense of it. I think it had something to do with the three Weird Sisters from Macbeth. I think it also had something to do with mankind’s pollution of the Earth. There was no program provided for me to identify the actors or provide any clues as to the meaning of the piece.

Hence, my dilemma: as a “critic,” do I owe it to you, the reader, to give W3 a 1 or 2 star rating because I didn’t “get” it? Is W3 a bad piece of theatre because I didn’t care for it, because it had me squirming in my seat wondering when it would end?

The answer: I’m giving it 4 stars. Why? Because the three actresses playing the Weird Sisters gave incredibly polished performances, and they had undeniably dynamic chemistry together (I believe they are sisters in real life). And the young man playing the fourth character was equally polished, and a spark plug of energy. And a lot of artistry clearly went into writing the script and creating the bizarre set, props and costumes. I would give the show 5 stars, but I think it could have made the same impression in about 40 minutes, and while I’m certain the frequent backlighting was chosen for a purpose, I don’t think obscuring the faces of the actors served the piece well.

And to the gentlemen sitting in front of me, I say this: art is not a service industry. Art is not always intended to amuse you, sometimes it’s about challenging your perceptions of good, bad, crap, professional, amateur, and so forth. Fringe artists are taking tremendous risks, putting a lot of skill and heart into their work. Theatre critics have a duty to let audiences know what they’re in for when they buy a ticket, but also a duty to artists to respect skilled work even when it falls outside of our realm of taste or interest. I’d rather swallow glass than sit through Waiting for Godot, but that doesn’t mean it isn’t a masterpiece.

W3  plays through July 27, 2014 at Warehouse-645 New York Avenue NW, in Washington, DC. For more information and to purchase tickets, go to their Capital Fringe page.