About an hour into The Other Day as performed at The Shop, a Dutch airport clerk named Steven (played by a very dashing Dash King), shows a young American named Mark (a puppy-dog-sweet Matthew Williamson) around Amsterdam until Mark’s lost suitcase can be found. The luggage contains the ashes of Mark’s dead lover, Santo. Steven takes Mark to the HomoMonument, where Steven has a poignant monologue about his dead husband Marcello that King delivers with such simplicity and such sorrow that it not only stole the scene; it stole the whole show. Because just then everything that the play seemed longing to say about love and loss was contained in King’s singular performance. 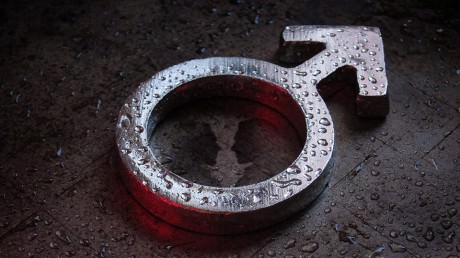 Unfortunately the rest of the production, directed by Michael R. Burgtorf, did not do justice to the play.

I had the impression while watching that despite casting and acting choices that left me intermittently amused but mostly annoyed, the play by Mark Jason Williams is probably very worthy.  I just read the play online to be certain—and found it to be quite wonderfully nuanced, far better than what’s reflected in this flawed production.

Santo (Jase Parker) and Mark meet in Manhattan at a Narcotics Anonymous meeting, where Santo hits on Mark because he’s cute, and they go to Santo’s place in Jersey City for a one-night stand. We are supposed to believe that thereafter they fall in love, though there’s a lot of conflict in their relationship. The production gets the brittle bickering right—actually, too right: Lines of dialogue are incessantly barked and snapped, and we get a gratingly bitchy Santo who rarely drops the “pompous jackass routine” that Mark at one point calls him on. But there’s never credible chemistry, nothing that could make us believe there’s anything like love between them, and absolutely nothing that would warrant Mark’s great grief once Santo dies. Which is one of the reasons King’s performance of Steven’s monolog of mourning so stands out: King has more to work with in the offstage character Marcello than Williamson has to work with in the onstage character Santo.

Mark and Santo have a close friend, Dina (Dannielle Hutchinson). She used to be a co-worker of Mark’s at the law firm where he’s an admin and out, and they’ve stayed friends. The script does a creditable  job of establishing Dina as multiple-dimensional, not the fag-hag cliché, and we get a coherent and compelling story of who she is apart from her connection to these two guys: She is going through a relationship drama of her own with another offstage character, a wealthy and cold-hearted man named Doug who married her to be his trophy wife. Dina wants things to work out for Mark and Santo. When they don’t (Santo goes back to drugs, fucks around, abruptly dies), Dina takes Mark’s side and wants things to work out for him. Dina also tries to prompt Mark out of his mopey self-pity: “Quit Harvey Milking it,” she tells him at one point.

Late in the play, in Amsterdam, where Dina travels with Mark on Doug’s dime after Santo’s death, Dina has a monologue in the red-light district, where she has gone for a walk while Steven is showing Mark Van Goghs. As written, Dina’s speech is an eloquent counterpoint to Mark’s story and an illuminating insight into her own. Speaking as if to a prostitute in one of the windows, she asks, “Do you ever get lonely in that window? Do you ever get rejected and take it personally?” Curiously only in that that solo moment do we get a glimpse through Hutchinson’s empathetic performance of the character depth she might have shown us the rest of the time.

This disappointing production lets down a fine play and a promising playwright because we never get what Mark and Santo ever see in each other (and the play doesn’t work if we don’t). So we never get what Dina sees in them either.

Except, as the script says, Williamson is cute.

Running Time: About one hour and 10 minutes, with no intermission.

The Other Day plays through July 26, 2014, at The Shop at Fort Fringe – 607 New York Avenue NW, in Washington, DC. For performance information and to purchase tickets, go to their Capital Fringe page.

Two preview articles about ‘Recovery’ are here and here.