Improv comedy is a form of theater where it is created in the moment at the performance. Some of the great comedians of our time; Amy Poehler, Steve Carell, Will Ferrell – to name a few – were born out of the improv scenes of New York, Chicago and Los Angeles. 4 and 9 Productions Improv Ensemble is daring to take on the difficult art form, but misses the mark in its attempt. 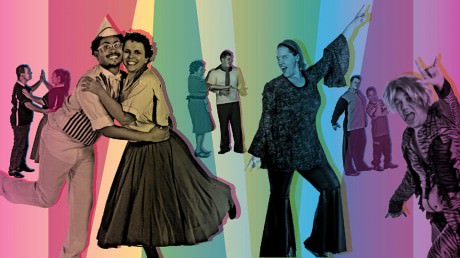 The premise is encouraging; the group promises to take us on a journey through four decades (50’s, 60’s, 70’s and 80’s) using a simple suggested subject of conversation and a job that either a man or woman can hold. Normally in an Improv show the audience would be asked to yell out suggestions for the artists to perform, it is one of the more fun parts of the show, in this production the audience was asked to write the suggestion down for a random draw. I was a tad surprised, but ready for anything so I go with it. Much to my dismay there was no draw, none of the cast members interacted with us, there was simply a choice of “outdoor activities” and “sales” listed on the projected scene. I still go with it, but the topics were barely covered and seamed irrelevant through the entire piece, making the whole exercise moot.

The show went on to have what would be called long form multi-person scenes. However, it was not clear what the premise was for any of the decades. In an improv show you expect the ensemble to work with a and off of each other stepping in where the other is failing, turning one scene seamlessly into another, but this never happened. We were left with what seemed like half-sketch, half -improvised scenes that lacked the storyline of a sketch and the spontaneity of improv. Even the basic rules of improvisational theater like ‘never say no to a scene partner’  or ‘never ask a question’ were broken several times.

I applaud the effort of the artists, I would love to see more improvisational theater in the area, but this is simply not what improv should be. The largest laughs came from gaudy costumes, the audience starving at any chance to chuckle.

Reviewing the program I see that there are many experienced artists in this ensemble, I encourage them to come back to fringe next year armed with a more organized show.

4 and 9 Productions performance of DECADES plays through July 27, 2014 at Gearbox – 1021 7th Street, NW, 3rd floor, in Washington DC. For performance information and to purchase tickets, go to their Capital Fringe page.