This is The Office on speed at a Sunshine radio station in fictional town Joiceville, North Carolina during a 4am broadcast during the End of the Days. The radio DJs are Nigel from the UK who does the weather and traffic, and Jack and Sheila.  The personnel of the station harass the crap out of each other with zingers left and right while consuming copious amounts of drugs.  One favorite line from Sheila to a guest, “There’s no standing in my studio!”  In between the bantering are ads from their sponsor Blind Corp in English and in Spanish! 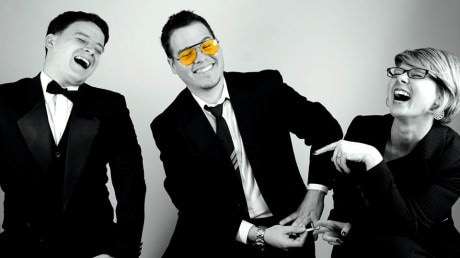 The set has four microphones, standalone mikes surround the radio disc jockeys table. It looks like a radio studio.

This high-energy show is so fast-paced that you can miss the humor if you don’t pay attention.  As we say in improv, there is “truth in comedy” and they bring the truth by utilizing a member of the audience during the show.

A total of seven drugs are consumed during the show as the DJs are in a constant state of highs and lows when they fall down in a stupor.

I loved the clever bantering and improvisation of the show.  Don’t get booked on this show as a guest during the4am slot during the end of days as you won’t get a word in anyway with the hilarious bickering of the DJs.