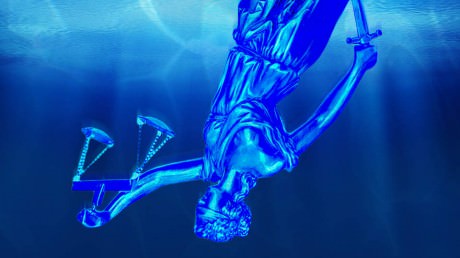 Ben Calman plays the role of a slimy corporate lawyer.  Teresa Catherine is his public defender wife. And Briana Manente is the titular character accused of infanticide. You know Ben is slimy because he tries to snag his wife’s client who is garnering national coverage for the crime of killing her children. Unfortunately, his performance did not live up to the script’s need for complexity (though the script could use a bit of focus) leaving him seeming flat when compared to the two women on stage.

Teresa manages to maintain her air of intelligence and care for the vast majority of the show (Especially in scenes where Briana is physically injured). Unfortunately, in the final scene she seems to lose her emotional depth, leaving the final lines lacking any real direction or power.

Briana Manente begins with a whimper, literally as she is weeping silently as the play opens, but builds into a final monologue that, with a few edits could leave the audience speechless.

Overall, the scenes with the two women were intriguing to watch and the concept is quite interesting.  I think the next draft of this show will be a lot of fun.

La Llorona plays through  July 27, 2014 at The Bedroom at Fort Fringe- 612 L Street NW, in Washington, DC.  For more information and to purchase tickets, visit their Capital Fringe page.