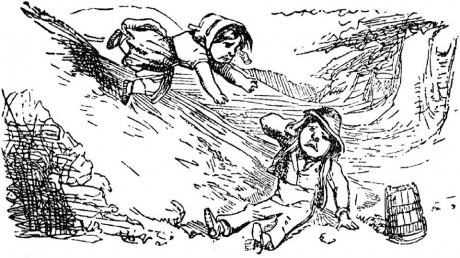 I am not an easily confused person. I was once in a play where a talking box of Rasinets transported the lead character to an alternate universe. I, like many Fringe-goers, am often fascinated by art that doesn’t make sense on first look, and relish taking it apart slowly to reach a vague yet meaningful conclusion.

The Tumbling thoroughly confused me, and for that I must give it credit.

The play consists mainly of odd movement and character interaction under strange, non sequitur words, from an interrogation over salad to a ten-minute monologue by Jack that begins with what could be a plan or explanation of his situation but devolves into a full conversation between two people coming out of one mouth. If there was a plot, I must have missed it, as the writing very deliberately seems to move from line to line with only the most superficial of connections. If it is a play that is trying its very hardest not to be a coherent piece of theater, then it is a commendable success. As it stands, I’m not sure what The Tumbling is driving at, and therefore can’t really comment on its success or failure to achieve that goal.

The technical notions of the play were somewhat lacking. Every prop was mimed, and invisible objects were often abandoned for others in reaction to contradictory narration or other confusing events seemingly intentionally deconstructing the audience’s suspended disbelief. This added to the surreal quality of the whole thing, but also served to alienate the audience further from whatever was going on. The lighting was a bit distracting, flashing or quickly blacking out and making me think alternately that the cues were broken or that the play had ended half an hour before it was supposed to. The blank stage, single folding chair, and basic costumes all made me wish for some element they had chosen to put additional effort into making stand out, but again, if the goal was a general impenetrable strangeness, the choices made sense.

One thing I can say without confusion is that the actors-Christine Asero, Ashley Dillard, Rachel Garmon, Stephen Note,s and Danae Truhart-were committed to their tasks, be they singing in unison about sexual frustration (the word “breeeeeeasts” held on a high note) or sharing a single folding chair in myriad creative ways. Had they not seemed as invested in their respective tasks/songs/movements/languages, the play would have fallen flat. This was a hard play to remain invested in, and their remaining in character through long monologues, speaking in unison, dancing, grinding, and screaming was all carried out with conviction. The highlight of this confusing piece was definitely the impressively befuddling performances.

The dialog was, as far as I can tell, plotless, had a great deal to do with sex, and was impressive in that it filled an entire sixty minutes without imparting any meaning that I could tell. Certain motifs, like a desire for a cookie or sex, the search for Jack’s missing appendage, a mission, or a general sense of nostalgic loneliness reappeared, but there were so many elements that even a monologue that could be construed as a brief moment of lucid thought for Jack just seemed like part of the madness. If Jack were more of an avatar for the audience, confused like us, even at some points, to give contrast to the utter bedlam coming from the other characters, I could have connected just a bit to his situation. As it stands, I was left with a slightly sour sense of having missed the point entirely, but perhaps that was the point. If the play was expressionist, I missed what it was trying to express, but I think the sense of utter bewilderment I left with was perhaps what they were driving at after all, to take a story so familiar as to be boring and drive it to such an extreme of randomness and scattered sexual frustration that it goes out the other side of fascination and becomes alienating again.

The Tumbling runs through July 27, 2014 at the Bedroom – Fort Fringe. For more information on the performance, visit the Fringe page.