You mustn’t miss The Flying Muskrat Theatre Company’s production of Gruesome Playground Injuries. The play debuted with Alley Theatre (Houston) in 2009, then migrated east to Woolly Mammoth (2010) and to Second Stage in NYC (2011). Playwright Rajiv Joseph (best known for Bengal Tiger at the Baghdad Zoo, a Pulitzer finalist) gives us here a perfectly crafted story of two companions first brought together by their connection to the nurse’s office in third grade. We catch up with them at critical moments every five years, beginning with age 8 and ending with age 38.  But Joseph doesn’t let the characters build chronologically so much as thematically as we jump times forward and backwards, through a veritable litany of self-imposed injuries.

The production is rightfully sparse, focusing our attention on the post-modern true-ism: we are all damaged goods; we are all wounded; we all have scars. Kayleen and Doug, our Harry and Sally, are perhaps more than most, trying to understand themselves by understanding each other. It’s a story of missed connections, bad timing, and trauma of both the physiological and emotional variety. Humor, the beautiful script, and the spectacularly grounded performances from the cast, keep the story from becoming maudlin.

Ben Peter, as Doug, brings a goofy energy to the 8- and 13-year old scenes in marked contrast to his manly size, and finds his way through every phase of Doug’s harrowing existence, without resorting ever to easy stereotypes of playing age one might expect from such a young actor. Peter’s Doug gains a beautiful gravitas over time, found through the character’s experiences of attraction, anger, frustration, and of course, his titular injuries.  We come to love and care for him over the eight scenes Rajiv Joseph carefully crafts for us, even when Doug’s life veers off the romantic path we wish for these two.

Doug’s “better half,” Caity Brown’s Kayleen, arrives as a completely convincing eight-year old–with a strident high-pitched insistence.  She is tiny and fierce as we first encounter her.  But over the thirty years, her physicality ages through frailty and suffering and the weight of a life of disappointment.  Over time, Brown’s riveting performance demands that we lean in so as to be ready to hug her at the first opportunity.

Young director Brennan Jones, at the helm of the production, steers the cast and design team (and even the running crew) elegantly through the story.  We are never distracted from our connectedness to the characters and their story.  Jones finds every nuance and balance his actors can bring to the play and gives them to the audience without fanfare.  His approach in turn, demands that we understand Kayleen and Doug and ourselves through this post-modern lens.  He never lets us off the hook or makes the play obvious.

The production is stitched together through Joseph’s eight scenes by the design elements: we watch the characters in painful isolation, change their costumes in silhouette behind fabric screens broken up in shards; we see them prepare their vital makeup and hair in full view in a soft pool of neutral light–facing one another and yet separated by the two-sided mirror; we have an apt moody soundscape; a swing set hides behind a fragile scrim, never to be enjoyed, but ominously reminding us of the dangers of life.

If the play’s timeline takes place in the dull reality of the final scene, the seven scenes of the past are black and white with a slightly smokey feel. Everything seems obvious in hindsight. “Don’t blow your face off,” Kayleen tosses off.  But the audience knows what happens next. On the other hand, for Joseph’s characters, the past is where all the love and laughter are found, where there is hope and connection, where we see Doug and Kayleen working hard to understand. “Does it hurt?”  “A little.” “I’m not someone else. I’m you.”

Gruesome Playground Injuries teaches us the depth of the Post-Traumatic Stress Disorder than modern life gives us all.  And it is certainly a beautifully crafted play done very well by a very promising young company. Don’t miss it. 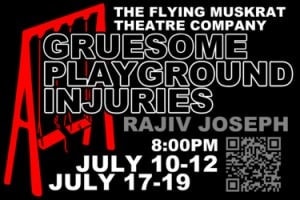 Gruesome Playground Injuries plays through July 19, 2014 at 8:00 pm at the James Lee Community Center Theatre-2855 Annandale Road, in Falls Church, VA. For tickets, purchase them online, or at the door.


Meet The Cast of ‘Gruesome Playground’ at The Flying Muskrats: Meet Ben Peter by Joel Markowitz.