History Made Interesting: Contrafact of Freedom

We’ve all heard “The Star Spangled Banner” sung at sporting events. Most of us know that the national anthem was written by Francis Scott Key? But who was he? Why did he write that particular poem? How did a shy Georgetown lawyer get stuck on a ship in the middle of the Battle of Baltimore? And for that matter, why was the United States even at war with England during 1814? 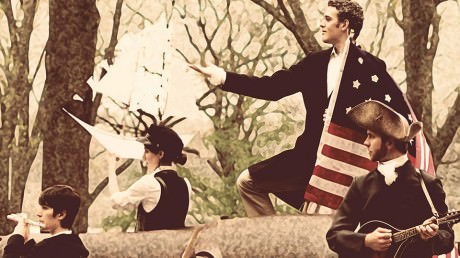 Hunger and Thirst attempts to answer those questions and more with their presentation of Alex Pappas’ new play, Contrafact of Freedom, at the Fringe Festival. For the most part, it works. History comes alive and this company of strong and compelling actors makes you care about the sometimes unbelievable chain of events that led Francis Scott Key to the deck of the HMS Tonnant in 1814.

Katie Consamus, J.C. Ernst, Michael Hardart, Jordan Kaplan, Lauren Lubow, Titus Tompkins, and Neal Tucker deliver strong and engaging performances, drawing out the humor and heart of the characters they are given to play. Not only are they compelling actors, but many of them play musical instruments on stage throughout the play. They are also entertaining as they sing snippets from songs that were potential national anthems and/or the variations on the drinking song that inspired the tune to our “Star Spangled Banner.”

Director Sarah Hankins makes the most of the stage space, ingeniously conveying a wide array of settings from battlefield to parlor to ship’s deck. In many ways, the staging is reminiscent of Peter and the Starcatchers.

The inherent weakness is in the material itself. Clocking in at approximately 75 minutes, the show itself feels about 15 minutes too long. There are a few scenes – particularly one with drunken British soldiers Will and Rege – that feel contrived and unnecessarily drawn out. At times, it was difficult to follow shifts in time and place. A second look at the script could tighten up those weaknesses and polish what has the potential to be a real gem of a play.

Running Time: 75 minutes with no intermission

Recommended for ages 13 and up (some profanity)

Contrafact of Freedom plays through July 20, 2014 at Lab II in the Atlas Performing Arts Center – 1333 H St., NE in Washington, DC. For more information and to purchase tickets, go to their Capital Fringe Page.