There is something to be said for idiosyncratic behavior contributing to the spice in any relationship (there is something else, entirely, to he said for the same behavior wrecking any and all relationships it comes into contact with). If you are interested in studying the spice after it’s been dropped from a high shelf, shattered, and been ground into the mud of reality, then Relationsh!t is your show! This sketch comedy show definitely goes places you don’t expect it to, and made me laugh out loud.

Jessica Cooper is the blonde one. Shannon Riley is the slightly less blonde one (she’s also taller {but one hates to be size-ist}). These two ladies have created a lovely sketch comedy show all about strange relationships and the strangeness of the mundane ones. There are several sketches that are truly funny (granny lap dance) and several that are giggle-worthy.  There are also several places where the comic timing fell flat, but it never discouraged the ladies. 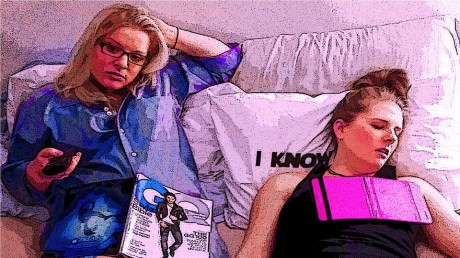 Let me say that I recommend this show. Having said that, there are a few issues to be worked out. First, there are far too many blackouts. You spend half the show in total darkness. We all know it’s a sketch show. We know you’re not actually turning into these other people, so it’s totally OK to keep all the props and costumes on stage.

It’s always a little thrilling to see people transform in front of your eyes (especially when we get to revisit characters that we thought were great the first time around).  Secondly, if you can’t dance, then farce, instead. Trying to get through a dance that you don’t have the ability to pull off makes things awkward. So, turn your deficiency into an asset and give us that big helping of ham (it satisfies in this kind of performance!).

And thirdly, it really is a fun little romp. These ladies are talented, and, with a little polish this show could go far!

Relationsh!t plays through  July 27, 2014 at The Bedroom-at Fort Fringe-612 L Street NW, in Washington, DC.  For more information and to purchase tickets, go to their Capital Fringe page.