On Wednesday, July 16, 2014,  the magic of live theatre was alive at the opening night performance of You, or Whatever I Can Get at the Baldacchino Tent Bar at Fort Fringe, while the audience filed into the fantastically intimate space as the actors/tech crew/band finished setting up and ran microphone checks. The energy and excitement was palpable and the entire audience ran that energy, and more, for the entire 75-minute song cycle. The strength of this production is rooted in the in-depth commitment by a core of individuals in multiple roles on the production. You, or Whatever I Can Get is written by Suzanne Edgar, Vaughn Irving, Farrell Parker, Steve Przybylski, Jason Schlafstein, and Doug Wilder, directed by Schlafstein, composed by Irving and Przybylski, and performed by Edgar, Irving, Parker, and Wilder. 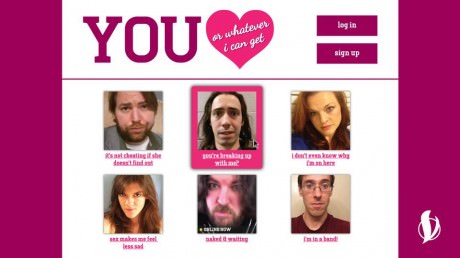 You, or Whatever I Can Get is a song cycle expressing the spectrum of human emotions relating to leaving your twenties and entering your thirties, with most of the songs striking an intriguing balance of poignancy and hilarity. This show is also about friendship and how no matter where you are in life you’re good as long as you’ve got your friends by your side. To quote the final song of the cycle, “Where Are You Now,” You may not know where you are, but I know you’re right here.”

The writers/performers/director/composers are functioning on all cylinders on this production, with their myriad of gifts shining in more than one way for each of them. At each of their cores is an authentic blend of humor, pathos, and a touch of self-deprecation that serve as the connective thread for this song cycle. My general feeling about song cycles is that they are very hit or miss, but this production has made me a believer. There is a special balance struck in this production between enough of a plot to make the songs flow into each other but not so many plot points that if you blink you miss some crucial incident. Thanks to Schlafstein’s direction, this production is tight and dynamic, so when you add the dynamite performances by Edgar, Irving, Parker, and Wilder, you’ve got a rollercoaster ride of musical theatre.

The four performer-writers serve up strong performances, both in their comedic timing, poignancy, and vocal ability, both as an ensemble of actors and individually.

Farrell Parker’s Jen is that girl we all know, who calls her friends bitches but would cut you before she let’s you think about doing the same. Her comedic timing is dynamite, and her vocal chops are at times powerful, delicate, and always heartfelt. Her performance of “Collapsible Heart” is both quirky and honest, and vaguely reminiscent of Tegan and Sara’s “Where Do the Good Go,” in the best way.

Suzanne Edgar’s Victoria wears her heart on her sleeves and is absolutely sure of herself until she isn’t, which I believe we can all relate to. Her performance of “The Way That She Loves Him” is tender and authentic, with beautiful silent pantomime by Parker and Irving to highlight the kind of connection Edgar’s character desperately longs for.

Vaughn Irving’s Phil is such a good guy, equal parts chivalrous and self-deprecating, and this balance makes for a wonderful and fully realized performance. His performance of “Worst First Date” is loveable and relatable, and his performance of “It’s Late, I’m Alone (Why Am I Thinking Of You?)” is a perfectly tender expression of his characters personal crossroads.

Doug Wilder’s performance is absolutely hysterical. He gives a full-bodied performance, in such a specific way that the audience knows exactly how his character feels before he opens his mouth to sing. His vocals are strong throughout the show, with his performance of “Alone in the Apartment” standing out as a wonderful moment for him, both in terms of comedic timing and vocals. His choreographed Wii remote dance in “It’s Not That Bad” is a standout moment of the show, for sure.

The three-piece band, consisting of Alex Aucoin on drums, Steve Przybylski on guitar, and Jason Wilson on bass really adds something wonderful to the production. The musicians are truly present for the actors, and vice versa, and you really feel a strong vibe between them onstage. Aucoin and Wilson both interact with the actors at moments in the show, and their performances are truly funny.

Every summer, there is a fringe show that everyone is talking about, well after the festival has ended. The people who saw the show talk about how wonderful it was, and the people who didn’t get their tickets in time talk about how they cannot believe they missed it. I believe that You, or Whatever I Can Get is that show for the 2014 festival. In short, You, or Whatever I Can Get is poignant, hilariously funny, and moving all at the same time. With references to Space Jam and Applebee’s worked into the script, what’s not to love? The creative team has created characters you can’t help but love, and their flaws/idiosyncrasies somehow make them even more loveable. This cast exemplifies strength, their chemistry with one another onstage is magnetic, their trust in one another is apparent from the first number, and they elevate each other’s performances to a level that transcends the festival.

You, or Whatever I Can Get is playing through Saturday, July 26, 2014 at the Baldacchino Tent Bar at Fort Fringe – 607 New York Avenue NW, in Washington, DC. For more information, to secure your tickets to this dynamite production, go to their Capital Fringe page.