In this one woman show the character of Medea is ripped right off the classic Greek pages of Euripides’ play and plunked down straight into the warehouse theatre. Make no mistake, Medea is completely aware of where she is, and takes the opportunity to explain the injustices of her plight. There is a fourth wall here, Medea pokes fun at audience members, so don’t be late to this show. Medea’s Got Some Issues breaks the fourth wall even further when it’s lead actress, Lisa Hodsoll, becomes herself in order to examine not just the role of women in society, but specifically that of women in the DC theatre scene. 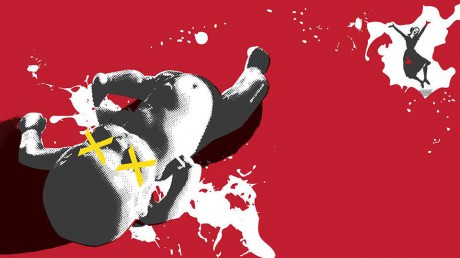 Director Joshua Morgan and the team from No Rules Theatre Company create the perfect atmosphere including a fabulous set design (Cory Ryan Frank) consisting of large movable Greek columns in the shape of giant phallus. In addition, they play a neat little pre-show trickery that sets that stage perfectly for Medea’s entrance. The real treat of this show is to see that fringe is not just for newcomers, but a chance for seasoned professionals to stretch their wings. Hodsoll does this brilliantly when she expertly takes us through classical bits of Euripides, puts on a variety of accents with precision, and makes us laugh at Medea’s sadly accurate view of sexism. Perhaps her best role is as herself lamenting the tendency of DC theatre to ignore it’s greatest assets: actresses like her.

As excellent as Hodsoll’s performances is, the struggle of a one-person show is always in finding the action;to tell a story without it turning into a rant. This is the trap that playwright Emilio Williams falls into. A successful play needs more than just talk, it needs an arc, a journey to keeps it’s audience from getting whacked over the head with it’s message. We get what the play is saying pretty early on, and though it’s presented in fun clever ways, it’s still saying the same thing again and again, and eventually Williams’ Medea‘s Got Some Issues starts to feel like a rant. Luckily for Williams the script has been picked up by Morgan and Hodsoll, and their capable hands keep the show from getting boring. Despite it’s flaws it’s still worth the journey for anyone that wants to see some truly fine acting this fringe, or just a chance to examine Medea from a modern female perspective.

Medea’s Got Some Issues plays through July 27, 2014 at Warehouse Theatre–645 New York Ave NW, in Washington DC. For performance information and to purchase tickets, go to their Capital Fringe page.