There are story tellers. There are actors. There is a difference between the two. In one we find a desire to live the character. To be a new person on stage so that the audience is allowed to sit outside as voyeurs and watch a tale unfold in front of them. It’s safe. It even has a built in fourth wall to keep the action tucked away and distant enough for us to digest it. This is acting. Letting people watch the life of a created character and learn from the watching. 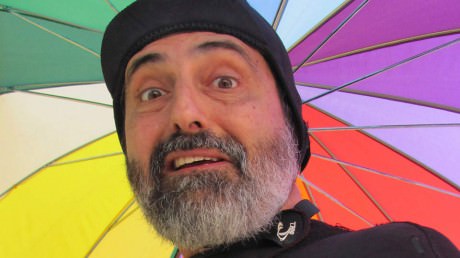 Charlie Varon is a story teller. He is a bard. He stands in front of you with no sets and no costumes, only words. His talents lie in the writing of beautiful, descriptive worlds that force your imagination to construct the sets around him. He uses words to bend your image of the stage into that of a retirement community. And with just his voice, the men a women sitting around you become the characters in the story. There is no wall. You are the story.

In a world where we have put a premium on acting, we seem to have forgotten how powerful and moving a story can be. Here we see why people would flock to the best storyteller in the village. The man that would take the essence of those around him and shape them into the characters that he needed.  Using the audience as the raw material, he shapes and cultivates them, creating a journey that lasts for an hour or so, then quietly sets you down in the world again. It’s an experience that reminds you that the journey itself is the goal, not the climax.

This show is fresh and beautiful (much like an ancient tree, rediscovered after a hundred years). And, while there are several times that, as a gentile, I was not privy to the inside jokes, I was shaped by the intent and by the storyteller.

Feisty Old Jew plays through July 25, 2014 at CAOS on F-923 F Street NW, in Washington, DC. For information and tickets, go to their Capital Fringe Page.