Home Reviews Capital Fringe Scene Stealers #1-July 18, 2014
Share
Facebook
Twitter
Pinterest
Linkedin
Email
Print
Here are our first list of honorees for DCMetroTheaterArts ‘Best Scene Stealers of  the 2014 Capital Fringe Festival’
______
Devin Gaither, as Joey, in Rock Bottom [A Rock Opus] Reacting to Blood Orphans Being Dropped
“Blood Orphans’ band manager is Joey, and as played terrifically by Devin Gaither, she’s one foxy, feisty boss lady. Gaither pretty much steals every scene she’s in, so canny and captivating is her performance. No wonder this lost-boy band has followed her lead…until now, when their career is in a nosedive and the band is coming apart. In a scene near the end called ‘The Last Supper’ Joey tries valiantly to rally them: “Warner’s dropped Blood Orphans today…. I want you to know I’m going to fight it. With all my heart and soul I’m going to fight to keep Blood Orphans on the Warner roster. We will prevail. We will prevail.” Her speech does not inspire them; they all roll over and give up. Gaither’s stunningly charismatic determination makes their inertia look like an epic fail.”  John Stoltenberg
______
Michelle Hall-Norvell, as Maat, Welcomes Osiris in Isis and Vesco Investigate the Curious Death of Dr. Freud
“Michelle Hall-Norvell steals the show the moment she walks onstage in an iridescent cape and a DC power suit to welcome Osiris. I couldn’t help thinking she belongs on the main stage of the Kennedy Center on on a hill in front of a conquering army. Her larger-than-life presence and the dead seriousness with which she delivers her speech is both impressive and hilarious.” Jessica Vaughan.
_______
Anna Jackson, as Kate, in Giant Box of Porn Looking Online.
“A young married couple—Ron (Grant Cloyd), and Kate (Anna Jackson)—are trying to figure out how the giant box of porn got into their apartment and why. Kate, freaking out, decides to try looking online. But all the search terms she comes up with, starting with “giant box of porn,” return exactly the opposite kind of results she wanted. The look of appalled astonishment on Jackson’s face in the process is priceless. Their pressing problem, Kate realizes as the laughter mounts, is “not Googleable.” In this scene as in others, Jackson shows she is surely one of the finest comic actors on the DC theater scene.”  John Stoltenberg
______
Dash King, as Steven, Delivering a Monologue at the HomoMonument in The Other Day
“About an hour into The Other Day as performed at The Shop, a Dutch airport clerk named Steven (played by a very dashing Dash King), shows a young American named Mark (a puppy-dog-sweet Matthew Williamson) around Amsterdam until Mark’s lost suitcase can be found. The luggage contains the ashes of Mark’s dead lover, Santo. Steven takes Mark to the HomoMonument, where Steven has a poignant monologue about his dead husband Marcello that King delivers with such simplicity and such sorrow that it not only stole the scene; it stole the whole show. Because just then everything that the play seemed longing to say about love and loss was contained in King’s singular performance.” John Stoltenberg
_____
Karen Lange, as Karen, Singing “Tears in Heaven” in Cabaret XXX: Everybody F*cking Dies
‘Karen Lange, who has played Karen in years past but now plays her Bostonian friend, has an exceptional voice, and always get the audience involved in the show. Her rendition of Eric Clapton’s “Tears in Heaven,” where she dips down to the very bottom of her range, is spectacular.” Brennan Jones.
______
TD Smith For His 10-Minute Monologue in Ten Principles )’(‘
“His monologue is mesmerizing and soulful: a broken individual’s quest for a community. TD remembers the sense of artistic accomplishment he used to get from building theatre sets. “Theatres are truly magical places” he declares. I have rarely seen as much magic in a theatre as I did during his singular story.” Vanessa Terzaghi
______
James Whalen, as Barry, delivering the Opening Monologue in Bethesda

“Whalen opens the play – sitting in boxers and a t-shirt reading the Washington Post. He plays a disgraced diplomat Barry who is sent home to Bethesda and starts the play working from home when his new boss calls. The one-sided conversation is a joy to watch and an impressive feat to pull off as we get the gist of a complete conversation and exactly what he thinks about the whole situation. It is a character study in microcosm and a high point I’m a generally fabulous play.” Jessica Vaughan

Doug Wilder singing “Alone in the Apartment” in You, or Whatever I Can Get
“Doug Wilder’s performance is absolutely hysterical. He gives a full-bodied performance, in such a specific way that the audience knows exactly how his character feels before he opens his mouth to sing. His vocals are strong throughout the show, with his performance of “Alone in the Apartment” standing out as a wonderful moment for him, both in terms of comedic timing and vocals. His choreographed Wii remote dance in “It’s Not That Bad” is a standout moment of the show, for sure.” Rick Westerkamp
______ 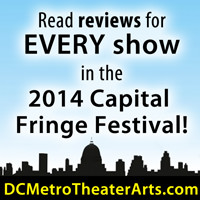