Charles Fuller’s new play, One Night, tackles head on one of the most pressing issues of our day: sexual assault. Though the play’s complex structure and diffuse through-line sometimes confuses or loses the audience, One Night still reverberates with power beyond the footlights.

Of course, sexual assault is not just a problem in the military, but the intensity of the problem there makes it an urgent issue.

Fuller’s heroine, a once feisty, in-your-face Alicia, is hiding out in a hotel room with her strange ex-GI protector Horace Lloyd. Their shelter for the homeless has just burned down by mysterious circumstances; they’ve given their government-provided voucher to the not-so-upright hotel owner Meny who thinks the two might be pimp and prostitute.

It turns out that several months earlier Alicia was gang raped by her frontline GIs; when she reported the incident to the authorities, her troubles only got worse. She also has PTSD.  She ends up homeless, living in an abandoned car. That’s when Jason shows up at her windshield, acting as her savior.

Kaliswa Brewster gives Alicia a quivering force, perfect for her psychologically wounded self. She also handles well the difficult transitions between the once brazen Alicia that we see in flashbacks and the now wholly frightened, PTSD-afflicted Alicia we witness in the present tense. The narrative arc of the character is another matter, but that has more to do with Fuller’s writing than Brewster’s acting: she does everything possible to reveal to the audience her healing process.

Jason Babinsky plays Horace with an unnerving innocence that belies his soldier past, but Horace is a man seemingly out of his element. He is soldier and violence prone intruder with a conscience, which always makes for a bad combination. Mr. Babinsky also handles well his difficult transitions back and forth between caring protector and–what seems to be–a lusting user.

Willie C. Carpenter handles Meny, the hotel owner, with a casual seedy creepiness that will definitely creep you out. His characterization is perfect, however, as a representation of the play’s ritualized dehumanization of women as sex object.

Shauna Miles plays several other female GIs, most significantly the military’s liaison on sexual assault complaints. She handles her multiple roles with authority.

Brit Whittle and Matthew Burcham round out the cast with solid performances. 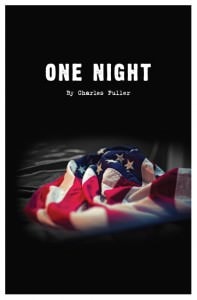 The production team spearheaded by Set Designer David M. Barber and Lighting Designer D.M. Wood do an excellent job differentiating the various locales and times in the production. Costume Designer Devon Painter creates an authentic representation of the various characters.

Ed Herendeen directed One Night, navigating the production through its transitions in time and space, for the most part keeping the play’s spine clear and developing.

The play’s action, which focuses on the healing process, presents Herendeen with several challenges, however, Alicia’s journey from young woman who is a psychological mess to one who is now on-the-road-to-recovery, all in the 90-minute play, stretches credulity beyond the breaking point.

Nevertheless, the play explores a subject that theatre is long overdue to explore in a serious way. And for that, we should offer thanks to Charles Fuller and the folks at CATF.

Running time: 90-minutes, with an intermission.

One Night and The Contemporary American Theater Festival (CATF) runs through August 3, 2014. Performance tickets to CATF can be purchased through the Theater Festival Box Office, Monday to Friday from 11 am to 5 pm, by calling (800) 999-CATF (2283), or visiting online.

The Playwright’s Playground: ‘The Playmakers – CATF 2014: Interview With Ed Herendeen & Peggy McKowen Who Preview The Season.

The Playwright’s Playground: The Playmakers CATF 2014: An Interview with Playwright Christina Anderson (‘The Ashes Under Gait City’).