Showcases! Sometimes amazing, and sometimes appalling, and this time pretty darn good! This is the Capital City Showcase (which can be seen outside the walls of Fringe {check their website for more details})! They had five shows, each with a different line up. This is show # 3. In this show we had comedy and we had music, so let’s discuss, shall we? 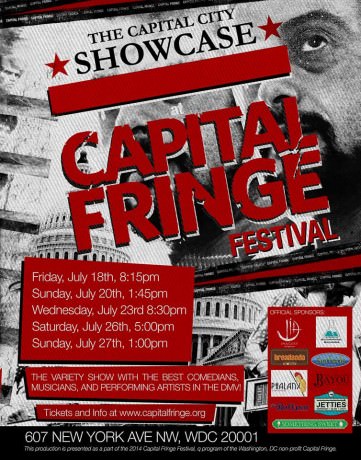 Starting with comedy is always a good idea. Especially when it is good comedy. Jamel Johnson is one of the funnier artists up there. His discussions of race and relationships were well timed and left you laughing instead of cringing (which can happen if their presentation isn’t flawless). As opening acts go, he was great!

Ryan Schutt was next and was definitely one of the stars of this showcase. His comedic timing was perfect. Instead of being insecure and aggressive, his self-deprecation was wizened and contemplative, allowing you to see a person who has packed a lot of life into an existence he claims has had very little significance. His ability to incorporate the audience without alienating them is something that will keep him in good stead for many years. Thank you for making me laugh out loud!!

Next up we had a lovely songstress named Linsay Deming. Her vocals were, in turns, sweet and powerful. Her ability to swing into her upper octaves as a belter carried her lyrics into another dimension as she sang them. And, when it was time to sing a love ballad to her husband, this simple song was heartwrenching. And I would like to apologize to her for the idiot (I use that word intentionally {she may have been smart as a whip but was acting like she had just fallen out of a “dumb blonde” joke}) who wandered into the venue in the middle of the song waving her drink around (incidentally spilling it all over me) and chatting loudly with her equally idiotic companion as they idly strolled past the stage completely ignoring Linsay.  So, sorry that people like that exist. Carry on with your beautiful music.

Then we come to David Carter (cue the sad trombone music), another comedian. Remember earlier in the review when I mentioned a comedian not being insecure and aggressive. Well, David was…very. His comedy seems to be powered by anger at the world, so he seemed, to me, to be almost attacking the audience. It felt like he was daring us to disagree with him, instead of attempting to use the art of laughter to slip past our defenses and open a path to a new form of thought. Needless to say, in a town like Washington where everyone is over-educated and knows everything about everything, attempting to batter down someone’s preconceptions will take more than a ten minute tirade (a ten minute comedy routine, on the other hand could do it quite effectively).

Our next comic was Shahryar. A fun name for a fun guy. His (I’m assuming from the content of his act, though I haven’t actually asked him) Pakistani roots play a big part of his act. And his Muslim faith does as well. And, I think with a bit of polish he could be wonderful. His timing seemed a bit off this evening (I’m not sure if that’s all the time {as this is my first time seeing him} or if it was just tonight) which dragged the energy down a bit, but overall it was a fun few minutes with someone from another culture.

And now: A big round of applause for JUSTIN TRAWICK AND THE COMMON GOOD!!!  Seriously. They are my new obsession. Their harmonies are tight. All of them are hot in various ways (there’s a nerdy one, and a big burly one, and super cute scruffy one), and all of them are super talented. They are fun to listen to and fun to watch. They switch styles on a dime. There’s an electric mandolin solo that will break your brain. And Justin, himself, has a wit sharp enough to skewer his audience as well as any of the comics I saw that night. Imagine if three hot guys sucked the souls and voices out of the Dixie Chicks (and I haven’t seen the Dixie Chicks for a while, so…), and you will have this band pretty nailed down. And yes, next time I see them on stage I will be pelting them alternatively with roses and tear-away pants (I am going to need many layers of pants {I’m a professional, after all, and need to maintain at least one layer at the end of the night for dignity’s sake [though they will be tear away as well]}).

I was quite impressed with the amount of talent that shared the stage this evening. I can’t wait to see the next one!!