There is nothing more wickedly fun than biting the hand that feeds. Prince William Little Theatre does just this in their crowd-pleasing production of The Musical Of Musicals (The Musical!). This zany spoof (music by Eric Rockwell, lyrics by Joanne Bogart, book by Eric Rockwell and Joanne Bogart) roasts everything from Oklahoma! to Cats, and for those who get the joke, it is bitingly funny. 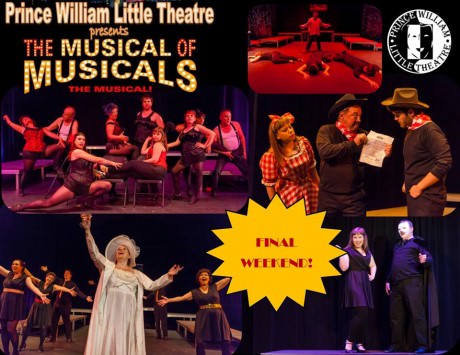 Director Susy Moorstein leads the audience through five distinct mini-musicals, each one in the style of a famous musical theatre composer. First up is the Rodgers and Hammerstein themed vignette, featuring numbers like “Oh, What Beautiful Corn.” Stephen Sondheim’s homage centers around a crazed artist/landlord who slits his tenants’ throats so as to coat them in papier mache. And of course, the piece inspired by Kander and Ebb takes place in a Cabaret…. in Chicago.

If the whole things sounds like a giant musical-theatre-geek inside joke, it’s because it is. But anyone with passing knowledge of the major musicals of the past half century will find the satire hilarious, and in some moments, even genius. In addition to a nine-person chorus, four actors play the lead roles in each of the five acts, and every successive part is just a variation on a theme. Hence, Steven Kutzleb always plays the Leading Man, whether as Big Willy (Rodgers and Hammerstein) or Billy Baby (Sondheim). The young damsel June (Katie Puschel) becomes “Junita” in the Andrew Lloyd Webber send-up, and “Junie with a J” in the piece dedicated to Kander and Ebb. 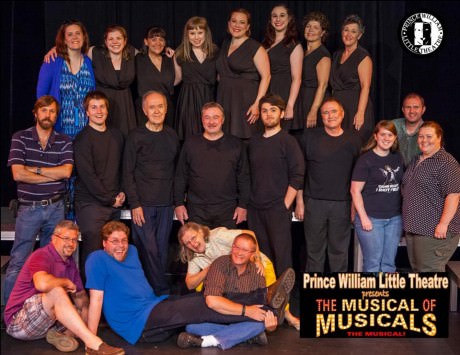 Ivy Elizabeth Cole was particularly riotous as the Mother/Auntie/Vamp. Her rich and nuanced vocals gave each of her roles a distinct characterization. Likewise, Larry Keeling demonstrates a deft flexibility as he transitions from the Phantom (who’s work, incidentally, may not be totally original…) to the flamboyant and white-faced Emcee. Both actors used a fine sense of comic timing to put a fine point on the vast array of tongue-in-cheek references. Matthew Scarborough wore many hats in Musical of Musicals, acting as Music Director, accompanist and the Narrator, whose melodic stage directions help set the scene (for example, introducing the second scene, a Sondheim-inspired New York apartment complex called “The Woods”).

They say we only truly hurt the ones we love. Underneath the catty satire of Musical of Musicals is a real love for musical theatre, in all its cheesy, sexy, glitzy glory. Musical of Musicals: The Musical! may cause you to shake your head at the foolishness of Broadway; Yet you may just find yourself humming an upbeat tune yourself as you walk out of the theatre.

Running Time: One hour and 45 minutes, including one intermission.