The APL Drama Club is rather unique. The non-profit theater group based in Laurel, Maryland is affiliated with the Johns Hopkins University Applied Physics Lab and is composed primarily of rocket scientists, physicists, mathematicians, engineers, and their families. Since the club was founded in the Summer of 2010, its mission has been to bring fun, engaging, and high quality theater performances to the community for free each year, through full-scale productions and a community outreach program that brings original skits to libraries and children’s hospitals. It is made up entirely of volunteers, all of whom are passionate about theater, and the lasting friendships it can bring. 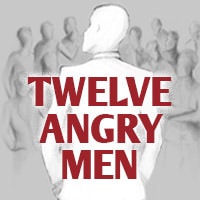 This summer, the club is excited to announce its next production, Twelve Angry Men, adapted by Sherman L. Sergel and based on the Emmy award-winning television movie by Reginald Rose: A man has been murdered, his son is on trial for the crime, but is he guilty? Eleven angry jurors are convinced that the answer is yes – but one man has a doubt, and he is determined to get past their easy answers and arrive at the truth. This riveting drama shows the twists and turns of a seemingly open and shut case, and engagingly explores the universal, timeless, and human themes surrounding prejudice, integrity, and justice.

Scott Lichtor, Director of the show, says he has not only grown from the experience, but has truly enjoyed it. “I wanted to be a part of Twelve Angry Men so that I could help to create a powerful and engaging show,” says Lichtor. “I read Twelve Angry Men many times, and I was really struck by the drama that it has. But that drama doesn’t come from artificial circumstances that you would never experience in real life, it comes from a very real place. The ideas and events in Twelve Angry Men are concrete, but they represent very abstract and very important concepts that are really worth considering.”

Lichtor isn’t the only one to feel the truth behind the show. Katie Samsock, who plays Juror 11, pointed out that every single character is essential to the outcome of the show – there are no bit parts: “The play may be only a 2 hour window into the lives of these 12 characters but the audience really gets to know each of them. There is nothing shallow in the design of these characters, they are all very real people, people that the audience can probably relate to.”

When it comes to being part of this show, and part of the APL Drama Club, many members of the cast concluded that the friendships are the best part. Betse Lyons (Juror 3) sums up the experience for most of the members: “I decided to try out the APL Drama Club for a short stint by working on set construction for Rumors in the summer of 2011. Everyone involved was having a great time, the show was hilarious, and I was impressed. The APL Drama Club has reminded me that the love of a thing can accomplish a lot – especially when accompanied by hard work.”