Johnna Adams. The playwriting voice of Johnna Adams is bold and unique and the genre and styles of her plays are an eclectic mix. In 2013, Johnna received a Steinberg/American Theatre Critics Association Citation for her play Gidion’s Knot, a play that The Contemporary American Theatre Festival premiered in Shepherdstown, WV in 2012. More than 16 regional productions are planned around the country for the 2014-15 season. American Theatre Magazine published Gidion’s Knot in December 2012. She was a 2012 Finalist for the Susan Smith Blackburn Award and the 2011 recipient of the Princess Grace Award. Johnna graduated from the DePaul University Theatre School with a B.F.A. in Acting. She’s studied with Tina Howe and received a 2012 MFA in Playwriting from Hunter College.

The local premiere of Gidion’s Knot plays at the Forum Theatre until this Sunday, Aug 3rd. In a partnership with NextStop Theatre Company, the co-production will transfer there to Herndon, VA., Aug 28 – September 14, 2014 for a three-weekend run.

In Part 2:  The conversation continues and Johnna takes DCMTA readers for a deeper look as she speaks about her writing process and her playwriting inspirations.

Sydney-Chanele: What is your writing process? (Do you write them out longhand, or on a computer? Do you write with music to inspire you?)

Johnna: Every play has its own writing process. My play Nurture wanted to be written out longhand TWICE (demanding little diva). Gidion’s Knot wanted to be written on the computer at my desk (sensible and polite). My play World Builders wanted me to go out to cafes and make appointments with friends to write together. Then it refused to be finished until I had taken a writing workshop and focused on it intently for a week (shy and insecure, wants to be social, but isn’t sure how).

They each have their own personalities. Some don’t want to be discussed in front of anyone until they are completely written. Some are shy around my parents and friends, but don’t mind being shown to strangers. They are all different.

That is one of the difficult things about writing. You think you are going to discover your “process” and repeat it like you are on a factory assembly line. But each time you write you have to rediscover or invent a process.

I think musically when I write. I try to think of the words and emotions with a musical ear. I listen for tempo and arrange things for dramatic effect in a way that is sort of like music. I sometimes think of writing as being close to composing. But I don’t listen to music when writing. It is a little like someone listening to music while composing music, maybe. Distracting.

How disciplined are you with your writing and do you have any writing rituals? (Do you write every day? Do you lock yourself in a room and write alone, or do you need people around you to stimulate your process?)

I am not disciplined. When I try to be, it sometimes shows in the play. If I have forced myself to write every day on a play, it feels about as exciting as anything you do every day. I call it a toothbrush play. It is as exciting to read or watch as watching me brush my teeth.

I need to be inspired, carried away to a fairy circle for a while. That is the only way I am going to be able to carry the audience away with me to the fairy circle. I can force it sometimes by taking classes, acquiring deadlines, and getting friends together to write. But, mainly it is a force that comes and goes as it will.

I don’t feel very in control of things. That is a frustrating way to work.  But I just trust in it and eventually inspiration appears.

Your works have ranged in style and subject. Is there a throughline or a conceit that is at the heart of your writing? Is there a Johnna Adams style when it comes to your work?

I think the throughline is writing about what you are learning instead of what you know. I try to be very immediate with my writing by including things that are fascinating to me in the moment I am writing them, even if I don’t know why I am including them. That gives my subconscious a chance to do a lot of the heavy lifting for me in a script. So, my plays dance around my interests. Grief is almost always a part of them for some reason. And I think that is a natural subject for drama. Funerals are one of the most necessary human rituals. We have to get together to let go of things sometimes. And my plays seem to function that way sometimes.

Does writing plays or working at your artistic endeavor pay the bills or do you work another job to make ends meet?

Right at this moment, I am not working. I am looking for teaching gigs. I had a great day job that let me build up a lot of savings. And I have supported myself on that and Gidion’s Knot for about two years.

You have a B.F.A. in acting from DePaul University. When did you  – and what made you – make the transition from acting to playwriting?

I slowly transitioned from an actor who wrote to a writer who (rarely) acts over about ten years. I think the day I finally realized that I was never going to play any of the characters I wrote was when I finally started to realize the shift had happened. I told myself at first that I was going to write great roles for actresses so that I could play them. But after acting in one of my first one acts, I realized that it felt wrong to be in the play – too self-conscious. And I hated it. I just wanted to watch.

When you are the writer, you get to play all the parts. You don’t get to do that as an actor, so it feels like being put into a small box when I go back to acting now. Incomplete.

Who are your playwriting inspirations? Are there two or three favorite living female playwrights you’d recommend to others or would like to see performed in the DC area?

I have tons of playwriting inspirations. I’m not going to restrict myself to listing only female playwrights. There is no need to. There is enough opportunity for everyone and no one should be so worried.

In New York there are several playwrights in the off-off Broadway world that I know who are making their way in an underground existence with little attention or encouragement and producing great work. August Schulenburg, Mac Rogers, Crystal Skillman, Fengar Gael, James Comtois, Matt Freeman, Mariah McCarthy, Lauren Feebie. All wonderful writers working against a system that I am sure they feel is rigged against them (that is a common playwriting paranoia.)

It is very boring to talk about playwrights and not their plays. Many of them are working on (or have worked on) science fiction plays – which are trendy right now in New York – and I am loving that trend. And all of them write with very unique styles that aren’t your usual domestic contemporary realism, which I find very refreshing.

What are your thoughts about the disproportionate number of female playwrights consistently being programmed by theatre companies?

I think it is an excellent topic for artistic directors and audiences. It isn’t something artists should think about. It has no reality in my world.  I have more productions and opportunity than most male playwrights I know.  And, sure, in the years when I don’t have much going on it would be very tempting to blame some vast, invisible prejudice for that.  I don’t.

When my plays aren’t being produced, it is because the plays don’t work and don’t do their job of connecting with an audience. Period. And if I want to change that, I try to improve my next play so that it means something important to someone other than me. So that people will want to produce it.  And that is all I think about. I don’t think about society, market forces or “issues.”  I think about the things I can control.

A female playwright who spends her time looking for prejudice as a reason her plays aren’t getting produced is looking in an unprofitable direction.  You can only change the things you can change. You can only be defeated by invisible demons if you believe in them and let them work on you. 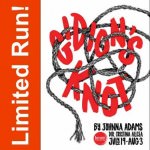 Gidion’s Knot plays through August 3, 2014 at Forum Theatre performing at Round House Theatre Silver Spring – 8641 Colesville Road, in Silver Spring, MD. Pay-what-you-want tickets are available an hour before every performance. Advance tickets may be purchased online.

Gidion’s Knot is a co-production with NextStop Theatre Company and will play August 28 through September 14, 2014, at NextStop’s Industrial Strength Theatre – 269 Sunset Park Drive, in Herndon, VA. For tickets, call (866) 811-4111 or purchase them online.

In Part One:  The Playwright’s Playground: Playwright Johnna Adams Discusses Giving Herself Permission to Write and Reveals ‘Gidion’s Knot’ Challenges and the Gordian Knot Analogy.

The Playwright’s Playground is a monthly in-depth conversation with local female playwright in the D.C. theatre community. Female theatre artists make up more than 50 percent of those involved in the theatre, yet the number of female playwrights being produced is dramatically lower. In this continuing Column, I will also interview and introduce DCMTA readers to the many talented playwrights in the DMV area to learn about their writing process, their inspirations, and their motivations and struggles to write and produce their art. Sydney-Chanele Dawkins.