The final Showcase! And my final Fringe review…..sigh. Well, let’s get to it! This final installment of the Capital City Showcase was a bit more subdued than the other I saw, which could be expected on a sweltering Sunday at 1 in the afternoon. But, regardless, there was still quite a bit of talent on that stage. Today we had comedians, musicians, and a story teller. So let me tell you all about them…. 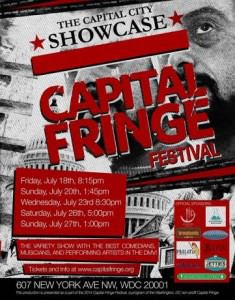 Let’s begin with Ilahe Izade, a lovely comedienne. While I got there about halfway through her set, the second half was delightful. An observational comedy aficionado’s dream. She took our mundane existence and twisted it around until, looking at itself, we had no recourse but to laugh out loud. Taking a page (literally) from a book used to teach immigrants english, she showed us how our language is as messed up as it gets.

Haywood Turnipseed, Jr. (and what comedian wouldn’t die for that name) had an act that probably would have been far less muddled had his 3 year old not been dominating the stage. His material was a lot of fun, but the flow would be interrupted as his child would come careening into his legs. Like a true professional, he used what was happening to create comedy, but it seemed a bit difficult or awkward for him to target his son like he would have an audience member.

Don Kim was up next. A jolly looking fellow with a ukelele and a beautiful tremulo. His songs were fresh and uninhibited. While his range isn’t huge, his comedic timing is perfect and he might have been one of the funniest people on the stage that day. I would love to see an hour long performance of his to see where he takes the audience with his thoughtful and skewering lyrics.

Scott Shrake was up next and, unfortunately, was not a great follow up to Don Kim’s upbeat performance. I have seen Scott perform in other venues to the delight of the crowd, but this time his acerbic wit was just caustic enough to burn his audience instead of setting an idea ablaze. And while I have seen his self-deprecating act give insight and meaning to seemingly insignificant situations, this time it seemed to shine a light on a vague and shadowy concept that he, himself, hadn’t really fleshed out.

So we get to David Tveite, whose understated demeanor was a perfect backdrop for his twisted sense of humor. He began his set discussing, what might be the darkest pitch for a Digiorno’s Pizza advertisement ever. Beginning with pizza and ending with suicide, while unpleasant, is apparently hilarious. He gauged his crown immediately and moved through his set like a pro, keeping the audience on their toes as he traipsed them down the garden path to the punchline, usually slamming their faces in the gate at the end (which made us laugh even harder).

And we finish up with the Mercy Alliance. This rock band lives in the milieu of Tom Petty. Mellow and groovy and a bit too loud for this venue. No one was more than 20 feet away, so we probably could have turned the amps down just a bit, as some of the language was getting a bit garbled. While the sound was pleasant enough, there was nothing there to grab me and keep me paying attention. It would have been a great band for a larger event, allowing you to come and go as you please with them as a great backdrop of sound.

And so Fringe goes! And from what I’ve seen at this Showcase, it would be well worth your while to check them out after Fringe is over!! See you all next summer!!