I started out with the cream of crab soup, and moved on to a buttermilk fried chicken sandwich, with a side of French Farce; it is difficult to say which of the two was more delicious… Such was the double pleasure of attending Annapolis Shakespeare Company’s production of The Imaginary Invalid, performed at Reynold’s Tavern as part of its “Comedy in the Courtyard” series. Along with a delightful colonial atmosphere and delicious food, I enjoyed a well-executed and thoroughly entertaining production of Moliere’s classic comedy. 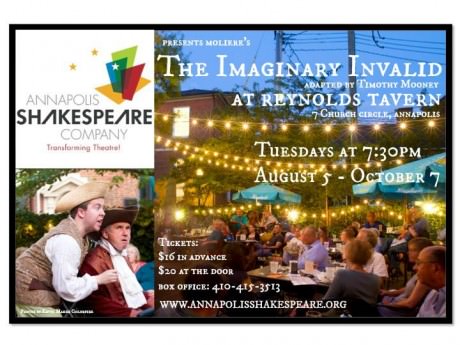 Witty and sharp, with clearly defined characters and opulent costumes, Director Kristin Clippard does justice to this classic satire of lust, greed, and the medical profession. Adapted by Timothy Mooney, The Imaginary Invalid is the story of the stingy hypochondriac Argan (Kim Curtis), who forces his lovely daughter Angelique (Ashlyn Thompson) to marry the son of a doctor (Zachary Roberts) so he can receive free medical treatments. In defense of the innocent young Angelique, her sassy maid Toinette (Briana Manente) and Argan’s reasonable brother Beralde (John Stange) scheme to convince Argan to allow his daughter to marry the man she truly loves, the dashing Cleante (Keegan Cassady). Big speeches, big dresses, and a lot of rhyming are to follow.

Like commedia del’arte, from which Moliere and his ilk sprang, the characters in Invalid are really caricatures: the greedy old miser, the pompous academic, the beautiful young lovers – and each requires a specific physicality. I’m happy to say that the whole cast of The Imaginary Invalid made strong physical choices, alternating between swooning love and sharp disdain in a second. Each actor brought a strong physicality to his or her role, such as Kim Curtis’ (Argan) bent-over shuffle, or Briana Manente’s (Toinette) saucy sidle. This specificity was especially important for actor Zachary Roberts, who played a whopping six parts in the show, not one of who moved in the same way. Likewise, in a brilliant scene, the maid Toinette (Briana Manente) poses as a woefully incompetent doctor. Her complete and sudden transformation into the bumbling, bespectacled doctor was a joy to watch. Likewise, Amber Gibson, as Argon’s gold digging second wife, was especially adept at the lighting fast shifts in emotion that make Moliere so amusing.

Summer evenings are the best time to experience outdoor theatre. With good food, a warm atmosphere, and high quality entertainment, initiatives like “Comedy in the Courtyard” are the kind of thing that draws audiences to live theatre. A poorly executed production would have done nothing but annoy the waitresses. But Annapolis Shakespeare Company managed to stage a fast- paced and very funny show. And yes, the cream of crab was great, too.

The Imaginary Invalid plays through October 7, 2014 at Reynolds Tavern – 7 Church Circle, in Annapolis, Maryland. You can purchase tickets at the door, by calling (410) 415-3513, or by going online.