In 1980, Evita took home seven Tony Awards, including Best Musical, Best Original Score, Best Book of a Musical, and Best Performance by a Leading Actress in a Musical (Tony Award winner Patti LuPone). The musical is associated with an unforgettable history, which helped win the Broadway Revival eight Tony Award nominations 32 years after the original production. That history seems to follow each new production, and Theatre Lab’s sizzling production, as part of their Musical Theatre Institute for Teens, is no exception. Evita is a difficult task for a younger cast, but the actors and singers conquered the challenge with full energy and impressive talent.

Music and lyrics by Andrew Lloyd Webber and Tim Rice and directed by Caroline Angell, Evita follows the story of Eva Peron (Anna Phillips-Brown), as she rises through the ranks of society. After becoming the second wife of Argentine president Juan Peron (Chad Vann), the audience witnesses Eva transform into a public figure that both represents hope in the Argentinian society, as well as a warning of the potential risks of rising to power too quickly. The musical  both begins and ends with Eva’s death, and the audience is left to decide for themselves how they felt about her contributions as a political leader. 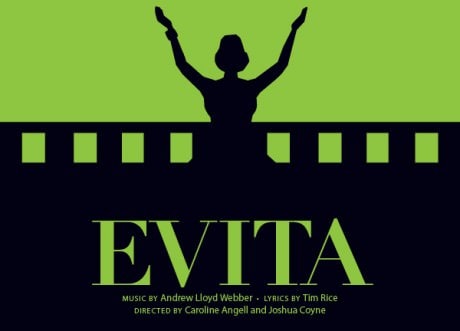 The book provides a fascinating look at history and after finally witnessing the musical; I am not at all surprised that Webber and Rice took home the Tony. Embedded within the beautiful music, the character Che (Jack Posey) acts as a narrator, and shares details of that which was occurring in Argentina around the time the musical takes place. The inclusion of history creates a dark reminder that while the music is catchy, the lyrics have a very serious message that is worth understanding.

Set Designers George Page and Caroline Angell makes clever use of the space. The set itself is simple, consisting of both an upper and lower level, and a moveable staircase. However, the truly interesting aspect is the use of the space in front of the stage. The designers created a ramp that connected the stage to the floor, and in doing so, the actors are able to decrease the distance between performance and audience. This intimacy creates a particularly striking scene in the ending moments of Act 1 during the number “A New Argentina.”

In the Act 1 finale, the entire ensemble was on stage participating in a political rally in favor of Juan Peron. In front of the stage, Eva and Juan were on a bed. Throughout the number, Eva would switch from being intimate with Juan, to standing on top of the bed, announcing her plans for his political campaign, and the power that they would gain. Angell’s choice to place the bed so close to the rally connected the ideas of politics and romance in the story, and added an almost frightening feel to the scene. I found myself in awe of Eva’s skill at gaining power through her relationship, and was anxious to see what would become of that ability later in the story.

While the space provided interesting opportunities for staging, the placement of the orchestra became an issue. The orchestra, passionately musical directed and conducted by Joshua Coyne, was directly above the audience, and at times, I could not hear a portion of the solos due the loud volume of the music. I know it’s a difficult space to find the right sound balance, but I am confident that this will be better for the rest of the run.

Many of the excellent singers rose to the challenge of Webber’s difficult score. Annie Mogilnicki, as Peron’s Mistress, showcased her gorgeous voice throughout her rendition of “Another Suitcase in Another Hall.” Her sound was pure and full of emotion, which matched the intensity of the lyrics that described her lonely life of floating from one short fling to another. Stephanie Frazier, as Memory Eva, did not sing until the end, but as her powerful voice rang throughout the theater during the “Montage” number, I found myself wishing I could have heard her sing more.

There always seems to be an ensemble member who plays a little of everything, and has numerous smaller roles in a production. Yana Madrid was one of those performers, and she shone in each role. Whether she was a featured dancer in “Buenos Aires” or a soldier in “The Art of the Possible,” her stage presence was spot on, and my eye was constantly drawn to her.

Chad Vann wowed me with his dance ability as a featured dancer during “Buenos Aires,” but also showcased a strong vocal quality when he entered the play as Juan Peron in “Charity Concert.” He created a strong presence on stage that complimented the role of the Argentinian President, but one of my favorite moments for him was when he conveyed weakness. During “Dice Are Rolling/Eva’s Sonnet,” in which the audience witnesses Eva’s illness, Vann’s acting ability shone through. I believed his deep concern and devotion for his wife, and was particularly impressed with how he infused that emotion into his voice as he sang the song.

Eva can be a tough role to play. The high notes are all over the place, and it does not help that the actress is meant to complete intense dance breaks in between numbers. However, Anna Phillips-Brown rose to the challenge. “Don’t Cry for Me Argentina” was a breathtaking solo, and her dancing ability was fantastic. The dance break in “Buenos Aires” was incredible for her,  but I also appreciated how Brown infused that dance ability into her physical acting, which helped her become the seductress that could win so much political power by the end of the musical.

Finally, Jack Posey’s portrayal of Che was a constant thrill to watch, in large part due to his physicality. Posey essentially had two roles in the play: an actual character in the story, and a narrator who would provide explanations of the events to the audience. Posey found a way to use the set to physically weave in and out of the story, which became a fun aspect to see unfold. His strong physical acting abilities and stage presence added life to solos that already showcased impressive vocals, like the emotional ballad “High Flying Adored.”

The high energy and talent of the cast and musicians made for an enjoyable night. The original Broadway cast of Evita provided the show with a high reputation, but this year’s Musical Theatre Institute for Teens cast members were equally impressive and should be proud of their exceptional work.

Evita continues its run tonight at 7:30 PM and tomorrow Saturday, August 9, 2014 at 2 PM and 7:30 PM at The Theatre Lab School for the Dramatic Arts – 733 8th Street. NW in Washington DC. Purchase tickets online.