For over 25 years the Elden Street Players were a successful community theater with a love for performing lesser known musicals. In January of 2013 they became the NextStop Theater Company and transitioned to being a professional company. The 18 months since have seen numerous changes at the Industrial Strength Theatre, the company’s long-time home in Herndon, VA, including the introduction of a summer cabaret series. With The Elden Street Musical Experience, NextStop paid tribute to the musical legacy of its predecessor, and a fitting tribute it was. 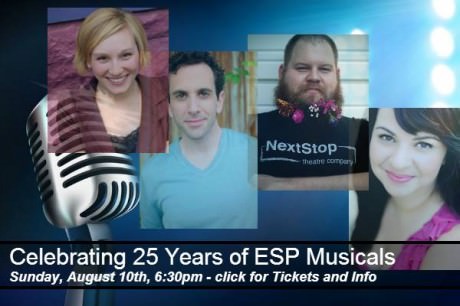 The Industrial Strength Theatre is a welcoming and intimate space. The layout is simple: a low stage, a piano, four microphones, and four chairs. Surrounding the stage is a handful of small tables with chairs which gives the space a look and feel reminiscent of an old jazz club. The sense of welcome and warmth, best exemplified by Producing Artistic Director Evan Hoffman’s heartfelt curtain speech with babe-in-arms, was what one would expect at a reunion of old friends, a family holiday gathering, or any other joyous celebration.

The concert featured the wonderful voices of Priscilla Cuellar, John Loughney, Jaclyn Young, and Matthew “Moose” Thompson who had all appeared with the company previously. With the delightful piano accompaniment of musical director Elisa Altman Rosman  they performed “Big Spender” from Sweet Charity, “Corner of the Sky” from Pippin, “Someone Else’s Story” from Chess, “Poisoning Pigeons in the Park” from Tomfoolery, “I Don’t Know How to Love Him” from Jesus Christ Super Star, “Tango Maureen” from Rent, “Aquarius” from Hair, “Miss Jones” from Blood Brothers, “If I Could’ve Been” from Working, “Touch-a Touch-a, Touch Me” from Rocky Horror Picture Show, “Who Will Love Me as I Am” from Sideshow, “Impossible Dream” from Man of La Mancha, “Unlikely Lovers” from Falsettos, “Louder than Words”from Tick, Tick…Boom!, and for the encore “The Best of Times” from La Cage aux Folles.

John Loughney kicked off the solos with an uplifting performance of “Corner of the Sky.” The clarity of his voice, his perfect understanding of the space, and the crispness of his performance all made for a great opening to the concert. In “Someone Else’s Story” we got our first solo taste of Priscilla Cuellar’s awe-inspiring vocal range and power. Her ability to be in one moment soft and sweet and the next to rise effortlessly to a belting crescendo was amazing to hear. Matt Thompson’s “Poisoning the Pigeons in the Park” was a perfect example of acting through the music. He drew the audience into a (seemingly normal) conversation and then playfully twisted it which led to smiles and laughter. Jaclyn Young singing Janet in “Touch-a Touch-a, Touch Me” was playful and light with just a hint of naughtiness. In short, it was perfect. The high point of the evening, however, for me, was “Unlikely Lovers” from Falsettos, the only sad song in the entire program. Filled with pathos and using all four voices, it was hauntingly beautiful.

Interspersed with the music were anecdotes, jokes, and stories about the various productions and the performers’ histories with the company. This gave the concert a spontaneity that is often difficult to capture in performance; it felt like having a night out with old friends.

The experience was so enjoyable that I did not notice that time was passing until it was over. An hour passed in what felt like minutes and I would have happily stayed another hour to hear more. The greatest compliment I can give is that I kept forgetting to take notes because I was simply enjoying the performance so much.